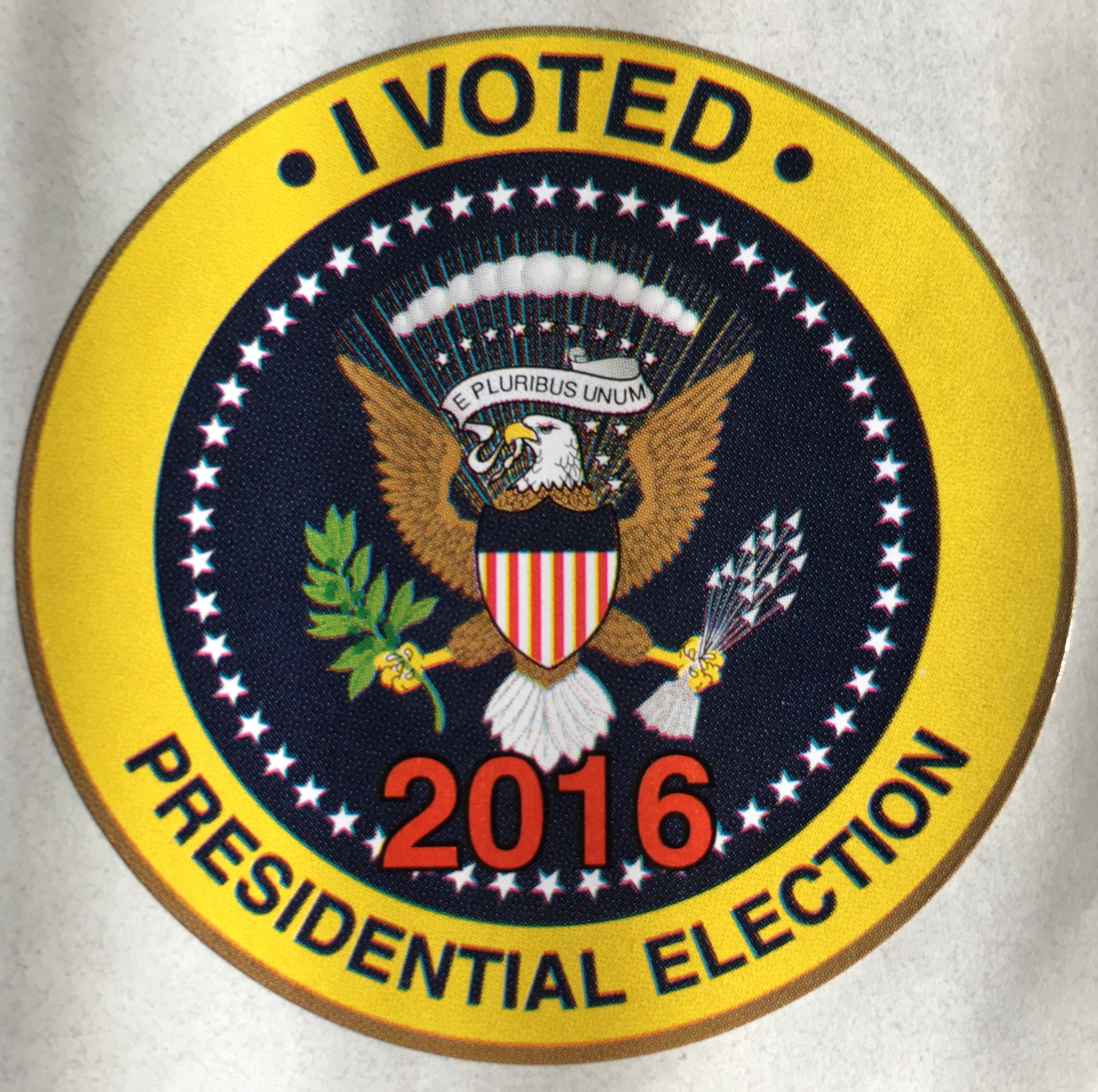 I Voted 2016 Sticker By Stephanie McGuinn

Sometimes that smell is sour, bitter, pungent and foul. That’s OK. Because there are a lot of strongly held positions out there, and democracy is how we resolve the disagreements.

But the stakes are high and the positions are stark.

Of course, they say that about every election. The stakes are always high and the positions are always stark.

The insurgent campaign of Donald Trump has been a revelation.

The Trump campaign has revealed other things.

First, the media is in the bag for the Democrats. We all kind of knew that, but watching how the media elite has framed stories, tweeted opinions, made mountains out of molehills, colluded with the Clinton campaign and otherwise done their level best to destroy Donald Trump, we now know their true allegiances.

Second, the Republican Party is in the process of being existentially transformed. Many elites will move to the Democratic Party because that’s the party of the Brave New World, a world of open borders, open trade, open hearts and open minds. The Republican Party will be party of the traditional nation-state, the party of traditional families, the party of small-town America and small-town values. The Bushes and the Romneys will lead the exodus over to the Democrats, following the well-worn path first travelled by the Rockefellers.

Third, an interesting candidate can make up for a lot of campaign dysfunction. Donald Trump at first refused to even hire a campaign pollster, and then when he hired a good one, Tony Fabrizzio, he balked at paying him his entire contract. Trump outsourced almost all of his get-out-the-vote operation to the Republican National Committee, and he has almost no surrogate operation to speak of. And yet, Trump was surging in the last weeks of the campaign, and might very well win this election.

This campaign also revealed many things about Hillary Clinton and her operation.

Clinton is a lackluster campaigner and has no inspiring message, and yet she has been dogged in her approach and generally has been very well-prepared at every stage of the game, especially during the debates.

The Clinton team has its fair share of dysfunction, as WikiLeaks has helped us to discover. She has a loyal cadre of supporters who will do anything for her, including bending the law, if not breaking it. Clinton is secretive, defensive, more than a bit paranoid about her opponents. People say a lot about the temperament of Donald Trump, but I have my fair share of reservations about Hillary’s temperament too.

This campaign has also revealed a lot about the American people.

It’s not just white working-class voters who have been drawn to Trump, although that is the bulk of his support. And many of those working class voters feel that the Democratic Party has abandoned them. Hillary called them deplorable. But they are not deplorable. They are desperate, desperate for change, desperate for a democracy that listens to their concerns, shares their worries and responds with effective action.

Hillary’s agenda excludes those concerns. She is too busy playing to her various constituencies, a group that includes super-wealthy donors, to bother worrying about the normal struggles of the Reagan Democrats. Those Reagan Democrats are now Trump Republicans, and they will be heard, one way or another, this Election Day.

(Also published on The Hill)