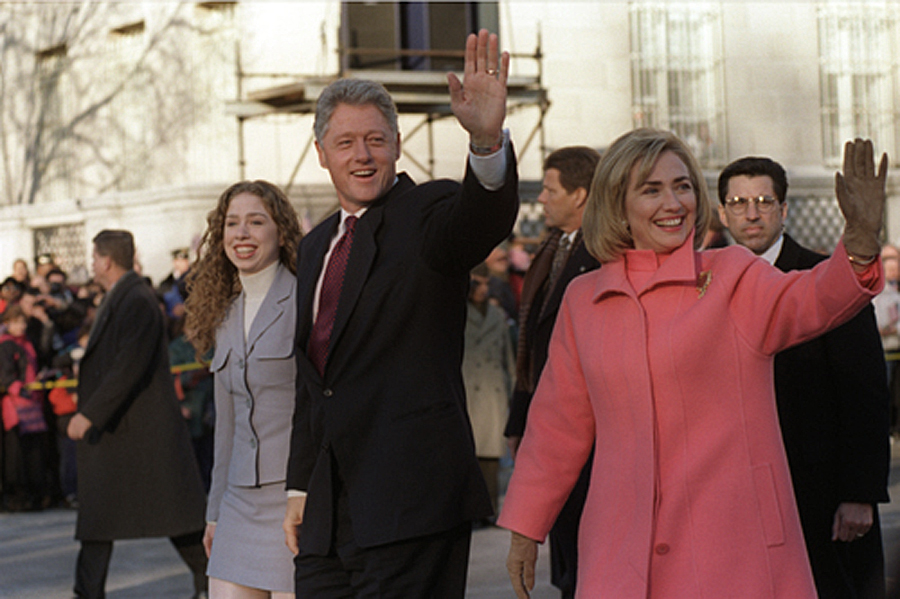 The President, First Lady, and Chelsea on parade down Pennsylvannia Avenue on Inauguration day.

I remember well when Hillary Clinton went on the Today Show and told Matt Lauer (back when he had hair) about the vast right-wing conspiracy that was determined to destroy her husband’s career.

She was right. There was a huge effort from various right-wing organizations to shed light on the various scandals that had been revealed in the Clinton White House.

But the right-wing conspiracy didn’t have illegitimate concerns. It turned out that Bill Clinton was a serial sexual predator, who did have an illicit affair with a young intern, in the Oval Office of all places. It was also revealed that Mr. Clinton lied about that affair under oath and, as a result, had to pay a fine and had to forfeit his law license.

Hillary was the tip of the spear in trying to manage what was well-known in Clinton World as “bimbo eruptions.” The very name, “bimbo eruptions,” gives you a sense about how the First Lady and her team viewed the women that Clinton was screwing around with. Bimbo, for those who don’t know the term, is not a word that denotes respect.

Mrs. Clinton believes in her heart of hearts that the best defense is a good offense and her strategy was to counter the vast right-wing conspiracy by attacking those women who were deemed to be bimbos, including Miss Lewinsky.

Bill Clinton was impeached by the House of Representatives for lying about his marital transgressions – a vote that tore the lower chamber apart. Reportedly, the reason many members voted to impeach Mr. Clinton was because they were shown graphic evidence that he had done bad things to other women.

So, while Mrs. Clinton was correct that there was a conspiracy to attack her husband, it was also true that Mr. Clinton was guilty of doing things that were probably illegal and certainly immoral.

He says that the financial elite, the news media, and the political establishments on both sides of the ideological divide are doing their level best to stop him.

And there is probably more than a little truth to that claim.

The news media is out to get him. Just read their Twitter feeds or, better yet, read their private email conversations, thanks to the public service of Wikileaks (I can’t believe I’m saying that).

Members of the reporting class hate Trump and they want him stopped. The Editorial boards across the country have endorsed anybody other than Trump and call him a dangerous demagogue. There is not one regular op-ed writer in either the Washington Post or the New York Times from either side of the aisle who say nice things about Trump. The Republicans are especially vehement in their opposition.

Not one CEO of a Fortune 100 company has endorsed Trump. Big donors are threatening to pull their donations from the Republican National Committee, if the RNC won’t stop working to get Trump elected president, which is in their job description, by the way.

The financial elite are horrified by Mr. Trump as are the Internationalists. The United Nations sees Trump as a Fascist and European leaders (with the notable exception of Vladimir Putin) desperately want Hillary to win. That is especially true of NATO members who have failed to pay their fair share of their dues for the last couple of decades.

So, it is true that the media and the financial elite don’t want Trump to win.

But what has been hurting Trump, thus far, is not his policy positions. The global elite want a continuation of the globalization of the international economy that has served them very well for the past decade. The globalizers won’t win fighting on those grounds, though. For the average American, especially for the average Trump voter, the last decade hasn’t been that great. And that is why they want change. And why they dislike the global elite so much, the elite that hates, with a passion, Donald Trump.

No, what is hurting Mr. Trump now, at the polls, is the same kind of sexual activity that got Bill Clinton impeached two decades ago.

Mrs. Clinton called them “bimbo eruptions” when the bimbos were ladies who were having affairs with her husband. But when women come forward to say that Donald Trump kissed them on the lips once twenty years ago or grabbed their butts, these are not bimbos. These are victims whose stories must be believed and whose tales show the depravity of her opponent.

I am not defending Donald Trump’s actions here. Nor will I defend his comments that were captured on a video tape as he spoke to Billy Bush about his strategies to pick up women, all of which he said when he was a married man.

There is no real defense to be had of those comments.

But we shouldn’t lose sight of the ironies here.