You Had It Right the First Time, Mr. President 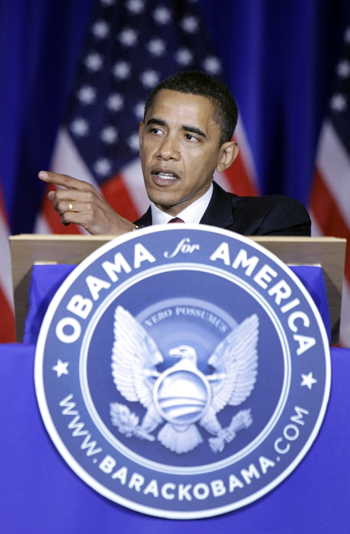 For centuries, the president of the United States has been at once a unifying representative of our diverse citizenry and a divisive head of his political party. It's the sort of tension that was inevitable given our Constitution's investment of significant executive power and political prerogative in our elected head of state.

Each man to hold the office must carefully consider how to navigate these treacherous waters, using the political capital of the presidency to serve his political program and advance the prospects of his party without hopelessly devaluing the office of the presidency by overly-partisan gamesmanship. For example, and to his credit, President Obama initially decided to refrain from affixing the presidential seal on his podium when he was speaking at partisan political rallies (as opposed to official engagements like say commencement ceremonies and speeches at civic organizations).

Sadly, however, the President has reversed himself on his previous stance, and just in time for a heated reelection cycle when he can use all the advantages, aesthetic and otherwise, that incumbency can offer. Reported CBS Radio's Mark Knoller on July 6:

The seal is back.

For the first time at one of President Obama's re-election campaign events, his lectern displayed the presidential seal.

It had been the policy of the Obama White House that the presidential seal would not be displayed at purely political and campaign events.

The policy ended today at Mr. Obama's campaign speech on the campus of Carnegie-Mellon University in Pittsburgh, where the presidential seal adorned his lectern.

Displaying the presidential seal serves to enhance the prestige of the event and contrast Mr. Obama's incumbency from Mitt Romney's status as a challenger.

There's nothing illegal about displaying the presidential seal at a political event being addressed by the president, but until now, the Obama White House felt it was inappropriate.

In 2010, White House Press Secretary Robert Gibbs told CBS News that it had been decided "that at strictly political events we would not use" the presidential seal.

However, an Obama campaign official today points out that "it's common practice for sitting presidents to use the presidential seal at campaign events when they are running for re-election."

The official pointed to the re-election campaigns of Presidents Bush, Clinton and Reagan.

All of that is true, but neither legality nor tradition should be the sole standards by which presidents seek to calibrate the tricky balance between statesman and partisan. Breaking with a tacky bipartisan tradition of the past was and would have remained laudable if the president stuck to his guns despite advisors clamoring for him to maximize every benefit of incumbency.

Backtracking and deploying the "but everyone else does it" defense will be good enough for Obama defenders and obnoxiously trite for Obama detractors. But for all of us, as Americans, it should strike us as an unfortunate reversal on a perfectly sensible move to defend the apolitical institutional integrity of the office of the presidency from the partisan ambitions of its temporary occupant.