How To Not Slip Out of the Middle Class 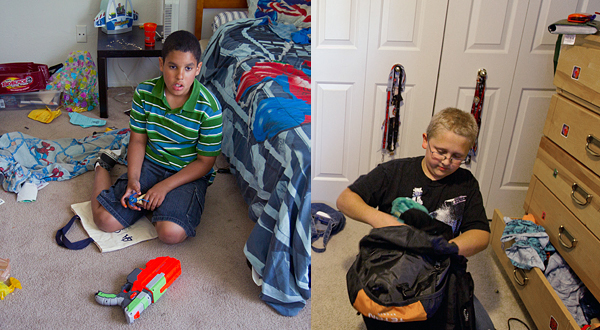 The New York Times had a fascinating story on its front page yesterday detailing the lives of two middle-class white women, and how one become wealthy in the eyes of Barack Obama and how the other is slipping towards poverty.

“They are both friendly white women from modest Midwestern backgrounds who left for college with conventional hopes of marriage, motherhood and career. They both have children in elementary school. They pass their days in similar ways: juggling toddlers, coaching teachers and swapping small secrets that mark them as friends. They even got tattoos together. Though Ms. Faulkner, as the boss, earns more money, the difference is a gap, not a chasm.

But a friendship that evokes parity by day becomes a study of inequality at night and a testament to the way family structure deepens class divides. Ms. Faulkner is married and living on two paychecks, while Ms. Schairer is raising her children by herself. That gives the Faulkner family a profound advantage in income and nurturing time, and makes their children statistically more likely to finish college, find good jobs and form stable marriages.”

File this under “No Shit”.

Turn out that Ms. Schairer got knocked up in her first year in college, never got married to the guy who turned out to be a no-good bum, but ended up having three kids with him anyway.

She grew up in a stable middle class family, but that one decision, to reproduce with a man who she would never marry and who would never offer to help pay for the kids, was enough to send her and her kids hurtling towards the lower-class.

While Ms. Faulkner has the benefits of a second paycheck (from her husband) and can share responsibilities of parenting with that same guy, Ms. Schairer basically runs around like a chicken with her head cut off, worried about having to feed her kids at the most basic level.  She then has to worry about getting someone to watch them when she goes to work (which usually means school, but sometimes means something else, especially when school is out of session).  She doesn’t have to worry about getting the kid to a camp or to music lessons, because she can’t afford them anyway.

One of the points of the story is that the upper middle class is prospering because they tend to marry one another, they tend not to abuse drugs, and they tend to be able to keep stable jobs.

While Ms. Schairer doesn’t abuse drugs, because she never finished college and because she doesn’t make a lot of money because she didn’t get to stay in college (because she dropped out because she got knocked up), her little family lives in a crappy neighborhood, where the schools stink and where people get in a lot of trouble.

Mr. Obama would have you believe that it is the fault of the rich that these people who were formerly in the middle class are now slipping to poverty, but I for one don’t buy it.

If you make profoundly stupid decisions when you are young, like deciding not to finish high school and then college, like getting hooked on drugs, like having sex with a ne’er do well which eventually leads to procreation, and if you decide to have two more kids with that person without any sense of a long-term financial game plan, I don’t see how that is the fault of the rich.

At some point in time, people have to take responsibility for their own decisions.  Single motherhood is bad for the mothers and bad for the kids.  I know some people might quibble, and if you have a lot of money, you can overcome anything (because you can hire nannies and you can live in decent neighborhoods).

But the facts are the facts.  Those feminists who like to pontificate that kids don’t need fathers and that single mothers can do it all are lying.  That lie is destructive.  And people must stop believing it.