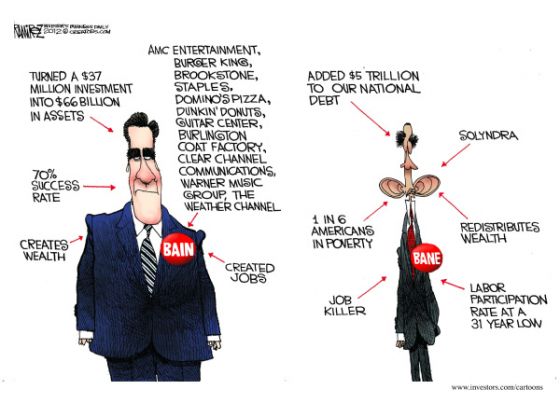 The Obama campaign has decided to concentrate all of its fire on Mitt Romney’s years at Bain Capital. As a result, it manufactured story after story about decisions made by Romney and his partners that led to greater profitability at the company, but also the heartache that often comes with that profitability.

For the Obama campaign, this isn’t just about Bain Capital, which most acknowledge was a well-run and ethical company. This is a bigger argument about the nature of capitalism in society today.

The president has a dark view of capitalism. Having never worked in private business, President Obama sees only the inequities that come from it. He doesn’t appreciate the hard work that is required to make a small- or medium-size business successful. He doesn’t understand the blood, sweat and tears that are put into a business or the courage that is required to become an entrepreneur.

The president sees the wealthy as fortunate; he sees the poor as unlucky; he sees inequity as evil; and he sees redistribution as essential. What he doesn’t see is that many who have wealth worked very hard for it, many who are poor made extremely poor decisions to get that way, and that a gap between the rich and poor is an essential part of the capitalist system.

The Obama campaign seeks to hammer Mitt Romney because he is (or was) a capitalist. They want to brand Romney as somebody who put corporate profits over people, who cared more about the bottom line than about fairness, and who might have outsourced jobs to faraway places.

The Romney campaign has to recast this debate.

Capitalism should not be on trial. Obamaism ought to be.

The president’s stewardship of the economy has been, in short, disastrous.

He has combined the worst elements of watered-down socialism (ObamaCare), crony capitalism (Solyndra) and left-wing populism (his proposal to raise taxes on those making more than $250,000) to make robust job-creation impossible.

His political rhetoric has inflamed class warfare and created uncertainty in the marketplace. His regulators have been hostile to American business in almost every sector, from energy to healthcare to financial services. His budget plans have been wildly irresponsible.

The result is predictable. Unemployment is stuck at 8.2 percent. Consumer confidence is declining. The deficit is getting worse.

The Romney campaign has gotten off track by fighting silly fights over what Mitt Romney did or didn’t do at Bain Capital. Obama’s attack on Romney’s specific role is distracting them.

They need to understand that Barack Obama is attacking not just Mitt Romney, but American capitalism in general. Obama doesn’t believe in free enterprise — doesn’t trust it, doesn’t like it. And he is betting that enough Americans have lost faith in the private marketplace that they will give him another four years in the White House.

Capitalism is not perfect, but it is far better than Obamaism.