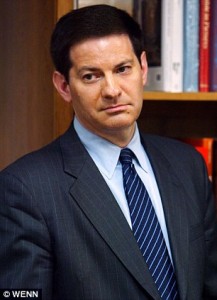 'Inappropriate': The White House complained about the slur by Mark Halperin. (photo: Wenn)

That is the whole point. When someone calls you out for being a dick, they are saying that you are unnecessarily being a jerk, a tool, an idiot.

Mark Halperin got it exactly right yesterday. The President was being kind of a dick at his press conference, although I wouldn't have added the modifier.

For that sin, Halperin was suspended from MSNBC, and perhaps that was the right decision for the left leaning network, but that doesn't mean that Halperin didn't speak the truth.

Obama was being a dick to the Congress. He was showing disdain for the legislative branch, just as he was pumping up his own hard work. It is awfully hard work arranging golf matches with John Boehner. Really
hard raising money for the campaign. And giving the okay to kill Bin Laden? You know how hard that was?

The President did a nice job getting Harry Reid to cancel the Senate's vacation next week. Talk about a dickish move. There are a lot of Senators who are not going to be very happy next week.

The President is going to continue to press Republicans to raise taxes, when he himself signed a law extending the very tax cuts he now condemns (which came from a democrat-dominated congress). Another dick move.

Mike Kinsley used to say that a Washington gaffe happens when somebody tells the truth accidentally. That is exactly what Mark Halperin did.

He is being punished for his gaffe, and he probably should be, but that doesn't mean that he wasn't right. He was. Obama was being a dick in that press conference.