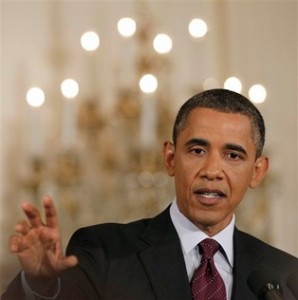 The President took himself out of the negotiation game yesterday with his hissy fit of a press conference where he castigated the Congress for not getting its work done when it comes to the debt limit.

The final package will now be negotiated by Senator Reid and Speaker Boehner, with an assist by Mitch McConnell.  The President will sign whatever these guys come up with, and they will jam it down his throat.  You don’t embarrass the Senate right before a July 4th recess and expect to get away with it.

The President will not veto any agreement reached by the Congress.  He doesn’t have the balls.  Nor should he.  But he won’t be in the room when Reid and Boehner reach a deal.  He will be lucky to get a briefing before the press does.

Mr. Obama lamented the fact that he was busy dealing with Afghanistan, Osama Bin Laden and the Greek crisis while the Congress was following its disjointed schedule.  As if.  What exactly has Obama done to help Greeks?  I’m sorry, I thought it was the Navy Seals who killed Bin Laden.

Admittedly, the Congressional schedule is a pain in the ass, but that is the Congress’s problem, not a White House problem.

Mr. Obama seems to think that the American people desperately want the Congress to raise taxes so that it can extend its debt limit.  I am not sure what he and his pollsters are smoking, but I think it was just made legal in California.  If raising taxes was such a good idea, why didn’t Democrats do it six months ago, when they controlled the House and Congress by large margins?

It wasn’t a good idea then and it isn’t a good idea now, politically or otherwise.  And yet the President continues to beat this dead horse.  What is up with this whole corporate jet fixation?  Where did this come from?  What clever little legislative analyst made this the item that will give Mr. Obama unstoppable momentum going into the next election?

I can’t imagine that this provision would raise any more than a billion dollars, and yet Obama still harps on it.  It’s crazy.  It’s stupid.  And it is unnecessary.

It doesn’t really matter though.  The President, with his snide comments yesterday, sent a clear message.  “I am done with negotiations.  Send me a bill.  Any bill.  And let me get back to my golf game.”