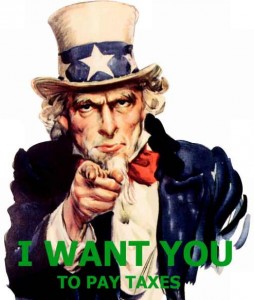 I am writing this blog post as I watch the Capitol Fourth on public television. When I worked on the Hill, I used to have access to the Capitol building, and I could watch it in person. Believe me, it was a great way to watch the fireworks.

I was thinking about fireworks over the weekend for obvious reasons and because I saw a New York Times article about a trend going around small and big towns around America regarding fireworks. These municipalities are letting people use fireworks again. The reason? Because they need the money.

Instead of banning the use of fireworks, small town mayors and big town city councils have decided that they can get money from taxing the sale and use of fireworks. They are giving people back their freedom because they need the money. Perhaps that isn’t the most idealistic reason to give the American people their freedom, but what the hell, I will take it. And it got me thinking that this could start a real trend in government, more freedom through taxation and regulation.

I know. It sounds counter-intuitive. But hear me out. What if we take all kinds of things that are widely banned or severely limited and then say that we are going to tax and regulate it.

What if we allow people to play Internet poker, for example. Instead of having the Justice Department wasting money trying to track down these scoundrels who would dare to play poker at home, we could have the poker players pay a small percentage of the rake to help regulate the games?

What if we make the oldest profession fully legal? There is plenty of supply and lots of demand. Is it moral? No, of course not, but since when is the government in the business of enforcing morality. There is a marketplace and it can either exist under government control or outside of it. Instead of wasting time and resources trying to stop people from doing what they are going to do, make the customers pay a tax. The money could go to a bunch of different things, including job programs that could help the hookers transition to better and more productive jobs.

What if we made narcotics legal, but just taxed it? We do that with tobacco and alcohol. Can you imagine the revenue the Feds and the States could collect? Could you imagine how many mental health clinics and treatment facilities that money could fund? Instead of having productive citizens, who don’t do drugs, have to pay for a war on drugs that is an abject failure, why don’t we have the users pay each time they use?

One of the biggest reasons that Prohibition was repealed in 1932 was because the federal government needed the revenue that they knew would come in with a liquor tax. Well, guess what? We need more revenue and we need it now.

Tax and regulate our way to greater freedom. That may be the new mantra for an America that is in desperate need of new revenue.