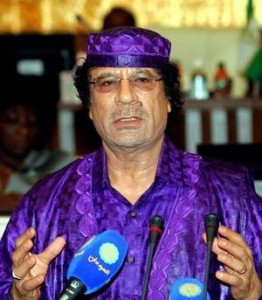 President Obama said last week that he was slowly “tightening the noose” around Colonel Gaddafi, the Libyan dictator.

Jay Carney, the White House press secretary, said yesterday, "We have acted with the utmost urgency ... together with our international partners to put pressure on Muammar Gaddafi and his regime.”

In the meantime, Gaddafi keeps rolling up victories in one town after another.

This is winning, Charlie Sheen style.

James Clapper, the President’s Director of National Intelligence, is about the only one who is getting it right. He said that he thought Gaddafi was going to win.

He was taken out to the wood shed by the media for his rare burst of candor.

What you can’t do is make some empty magnanimous gestures to help the opposition, say inexplicably that a noose is tightening around the Gaddafi regime, and let him easily put down the rebellion in his kingdom. You can’t say that you are going to kill the King and then let the King win.

You look weak, you look uniformed, you look stupid, and you look out of touch when you do what the Obama regime is doing right now.

Charlie Sheen is making an idiot out of himself, but he has an excuse. He has clearly lost his mind.

I can’t for the life of me figure out what the Obama Administration’s excuse is. They say we are winning, but from what I can see, the only one who is winning is Mr. Gaddafi.