Hands on the Steering Wheel 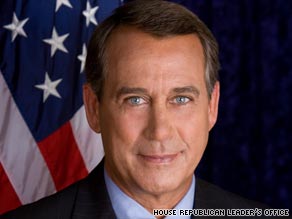 House Speaker John Boehner has so far driven Congress in the right direction.  He has negotiated successfully to cut spending and keep the government open.  He allowed for an open process that delivered the largest discretionary spending cuts in the history of the lower body.  He has gotten high marks from just about everybody on how he has risen to the occasion in difficult times.  He has his hands firmly on the steering wheel and he seems to know where he is going.

He is getting some complaints though from the back of the car.  They want to get to the destination right now.  They want the Senate to accept all of the policy riders from the House.  They don’t want any more of those short-term spending resolutions.  They want to get their hands on the steering wheel because they think they can do a better job of driving the car.

Jim Jordan, who is head of the Republican Study Committee, is one of those back-benchers who says he isn’t going to vote for the continuing resolution.  He is not going to put up with this strategy of stopping and starting.  He wants to get to the final destination right now.  He is joined by a familiar cast of conservative think tanks, including the Heritage Foundation, Tea Party Nation, the Family Research Council and Club for Growth, who believe that by continuing to pursue short term resolutions that cut spending, that somehow they are selling out conservative principles.

When I was a kid, when my parents would take us on vacations, we would inevitably drive (we never flew anywhere).  Having three boys in the back of station wagon (before the era of seatbelts) would inevitably lead to a lot of screwing around, and a lot of complaining about how long the trip was taking.

These complaints remind me of those days.  Boehner has his hands on the steering wheel and he knows where his going.   The Republicans ought to give him the benefit of the doubt and pass this CR.