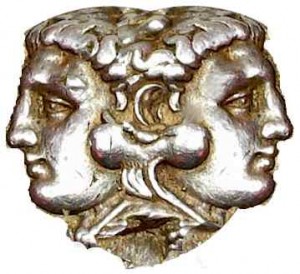 In Roman mythology, Janus (or Ianus) is the god of gates, doors, doorways, beginnings, endings and time. His most prominent remnant in modern culture is his namesake, the month of January, which begins the new year. Most often he is depicted as having two heads, facing opposite directions; one head looks back at the last year while the other looks forward to the new, simultaneously into the future and the past.

Janus is a fascinating mythical figure. He is honored at the beginning of each year, although most people don’t know it, because January is named after him.

According to Wikipedia: “He was frequently used to symbolize change and transitions such as the progression of past to future, of one condition to another, of one vision to another, the growing up of young people, and of one universe to another. He was also known as the figure representing time because he could see into the past with one face and into the future with the other.”

But invoking Janus can also be an insult. If you are a two-faced Janus, that means you are a hypocrite, a liar, a shifty, no-good, dirty scoundrel. Or perhaps a diplomat.

The term “two-faced Janus” came to my mind as I read the editorial page of the New York Times this morning.

One column, by the always fascinating David Brooks, talked about the fragile world of diplomacy, made even more fragile by the Wikileaks guy who leaked a bunch of private cable sent by our diplomats back home: “The WikiLeaks dump will probably damage the global conversation. Nations will be less likely to share with the United States. Agencies will be tempted to return to the pre-9/11 silos. World leaders will get their back up when they read what is said about them. Cooperation against Iran may be harder to maintain because Arab leaders feel exposed and boxed in. This fragile international conversation is under threat. It’s under threat from WikiLeaks. It’s under threat from a Gresham’s Law effect, in which the level of public exposure is determined by the biggest leaker and the biggest traitor.”

Another column, written by Julie Zhou of Facebook, comments on the fragile state of civility on the Internet, made much, much worse by anonymity: “THERE you are, peacefully reading an article or watching a video on the Internet. You finish, find it thought-provoking, and scroll down to the comments section to see what other people thought. And there, lurking among dozens of well-intentioned opinions is a troll.  “How much longer is the media going to milk this beyond tired story?” “These guys are frauds.” “Your idiocy is disturbing.” “We’re just trying to make the world a better place, one brainwashed, ignorant idiot at a time.” These are the trollish comments, all from anonymous sources, that you could have found after reading a CNN article on the rescue of the Chilean miners…Trolling, defined as the act of posting inflammatory, derogatory or provocative messages in public forums, is a problem as old as the Internet itself, although its roots go much farther back. Even in the fourth century B.C., Plato touched upon the subject of anonymity and morality in his parable of the ring of Gyges.  That mythical ring gave its owner the power of invisibility, and Plato observed that even a habitually just man who possessed such a ring would become a thief, knowing that he couldn’t be caught. Morality, Plato argues, comes from full disclosure; without accountability for our actions we would all behave unjustly.”

In the first column, being two-faced is held up as a diplomatic virtue. In the second, it is exposed for what it really is: an excuse to be rude.

I am not sure that the gossip that came from the Wikileaks leak is all that devastating to national security. I may be convinced otherwise. But it seems to me that Israel and the United States made out pretty well with the revelations that the Arab States find Iran to be its biggest existential threat. I, for one, was not very surprised to hear that Silvio Berlusconi parties like a rock star, that Vladimir Putin is running a mobster state, or that we have a big problem with the Pakistanis.

I doubt that the diplomats on the other side of the equation are that surprised by these revelations either. But, undoubtedly, they will use them to try to embarrass our diplomats for years to come.

Never put anything in writing; anything you wouldn’t want to see on the front page of the Washington Post. That was one of the first lessons my old boss Bob Michel taught me when I first came to Capitol Hill. Perhaps our diplomatic corps could learn the same lesson about what they write.

Which gets me to the second point. As someone who does a fair share of blogging, I have a pretty thick skin. People say some pretty nasty things about me on occasion, and that’s okay. I can take it. But it is annoying that so many of these brave souls who comment so viciously do so behind a wall of anonymity.

They are two-faced. What they say when they are anonymous is probably much different than what they would say if they proudly identified themselves.

You are far less likely to be a huge jerk in public than you are in private, if you are a normal human being. Of course, some people are just jerks and it doesn’t matter if they are in public or private. And that is fine, as long as we all know that.

That is why I think websites should require people to identify themselves if they want to post comments. I guarantee that the level of discourse would improve dramatically.

Janus could get away with being two-faced because it allowed him to see both the future and the past. Most normal people, including our diplomatic corps, would be better served by being straightforward and honest in their daily lives, and leave the two-faced strategy to the Greek Gods.