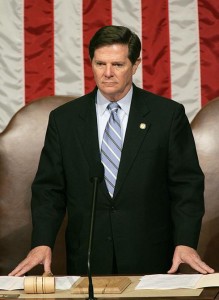 There were two surprises over the Thanksgiving Day break that caught my attention.

The pleasant surprise came when Notre Dame, who earlier this season lost to the Naval Academy in football, pulled off a major upset against the hated USC Trojans. The Irish, led by a true freshman quarterback, overcame four turnovers (by that same freshman quarterback) to beat Southern Cal on their home turf in a driving rain storm.

The Washington Post reported: “A jury in Austin found DeLay guilty of money laundering and conspiracy to commit money laundering. Punishment for the first ranges from five years to life in prison, but the former congressman from the Houston suburb of Sugar Land could receive probation. DeLay will remain free until he is sentenced on Dec. 20. "This case is a message from the people of the state of Texas that they want - and expect - honesty and ethics in their public officials," said Travis County District Attorney Rosemary Lehmberg. "All people have to abide by the law."…"This is an abuse of power," the former congressman said outside the courtroom. "It's a miscarriage of justice, and I still maintain that I am innocent. The criminalization of politics undermines our very system, and I am very disappointed in the outcome."”

DeLay, for years a subject of an intense federal investigation into his relationship with Jack Abramoff, escaped that possible prosecution when the Feds turned into the gang that couldn’t shoot straight. Nobody up here thought that the Texas case was worth a hill of beans for a couple of reasons.

First, the prosecutor, Ronnie Earle, who initially prosecuted the case in Austin, was quite obviously a partisan Democrat who simply didn’t like DeLay very much.

DeLay was right to say that this prosecution was a blatant example of the criminalization of politics. But he shouldn’t be shocked by it. Politics is increasingly becoming a blood sport where the end game often means somebody goes to jail.

Of course, any time you take a case like this to a jury outside in the real world, you run some risks. I bet you that if somebody were indicted for giving campaign contributions to a political candidate with the expectation that that candidate would vote a certain way, another very common practice here in the Beltway, that a jury would convict that campaign contributor for bribery.

Common practice here in DC looks an awful lot like plain old corruption everywhere else in the country.

I used to work for Mr. DeLay back in the late 1990’s. He was a hard charger back then, an aggressive politician who didn’t like to take no for an answer. Those qualities made him an extraordinarily gifted Whip, a man who could count votes well and who would use all of the levers of power at his disposal to turn votes to his will.

That aggressiveness didn’t always serve him well. He didn’t need to push another redistricting plan down the throats of the Texas Legislature. We already had a comfortable majority in 2002. But he felt strongly that he could get more seats and better yet, he could push out of office Democrats like Martin Frost and Charlie Stenholm.

As we all saw on the show “Dancing with the Stars”, DeLay is a “take-no-prisoners” kind of guy. And now, if his appeal fails, he may end up being one.