Trump’s Speech: Not Eloquent, but It Hits the Mark 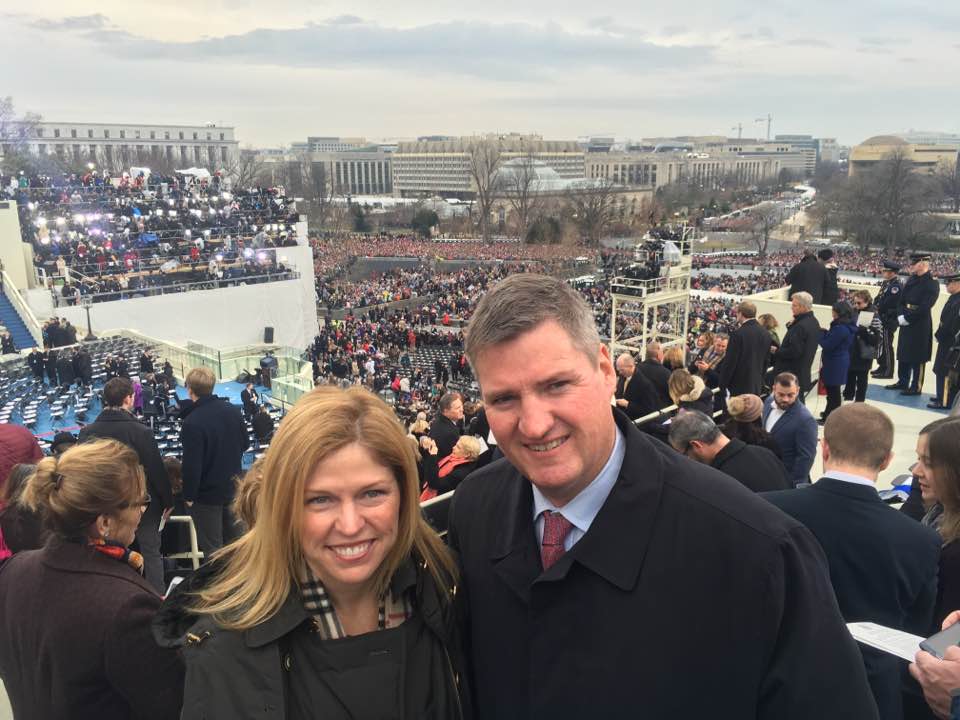 With my wife, Kerry Fennelly Feehery, at Donald Trump's Inauguration.

(This originally appeared on Political Storm)

Donald Trump doesn’t get his facts straight; he exaggerates for effect; he makes claims that are verifiably false; and often opens himself up for ridicule with his braggadocio.

But on the big things, he is more right than anybody else and that is why he is our new president.

Listening to his inaugural speech, from the platform built on the West Front of the Capitol every four years, I couldn’t help but think how isolated he was among the sea of political leaders. Trump might have been the only president since John Adams to not have the support of any former living president. As a businessman with no experience in high office or in the military, Trump is an historical oddity. How could this possibly happen?

But if Trump were basically alone on the platform (with the exception of Sheldon Adelson, the big Republican donor who bought himself a seat about 15 rows behind the incoming and outgoing presidents), he was sympatico with the millions of Americans who feel isolated from the government and from the political class. Hundreds of thousands of those Americans made the trek from across this country to see their guy get sworn in.

Trump uncomfortably put his finger on a truth that gnaws away at the trust of those who live in America’s heartland. People in Washington, D.C., and the surrounding suburbs have been doing a lot better than those in the rest of the country.

We in Washington live in a bubble. I freely admit it. It’s a comfortable bubble, unbothered by the Great Recession. The suburbs surrounding the District of Columbia are now among the richest in the nation, per capita. D.C. itself boasts some the finest restaurants in the world and is now the costliest city to raise a family in the country.

Lobbyists and lobbying are not the real reason for the booming D.C. economy. Much of it is because of the rise in spending on national security in the era of radical Islamic terrorism. The rest is because of the talent that has come here from the rest of the world, drawn in by a technology corridor and by the changing demographics of the Capital City.

But that’s not what voters think. They think that self-dealing politicians (most of whom leave for home every weekend and have a hard time paying their own bills) are feathering their nests, stealing their dollars and getting rich at the expense of voters.

Trump might have been wrong on some of his facts but he was not wrong about the sentiment of the American people. He hammered on that theme at the very outset of his speech:

“For too long, a small group in our nation’s capital has reaped the rewards of government while the people have borne the cost. Washington flourished — but the people did not share in its wealth. Politicians prospered — but the jobs left, and the factories closed."

And the fact is that in many parts of the country, factories have closed, relocating to Mexico or being shuttered because they couldn’t compete against the Chinese. The political class largely shrug when companies leave, figuring that it was all part of creative destruction and that consumers would benefit because of lower prices that come from increased competition. Trump refused to shrug, especially during the campaign. He said he could fix it, he could keep American companies from leaving America, with a combination of carrots (tax cuts) and sticks (tariffs).

For the monied and educated elite, this is all a bit horrifying. We can’t possibly return to protectionism! We can’t stop globalization! But to the working class, the Harley-riders, it makes perfect sense. Somebody has to protect American jobs. And only Trump has the know-how and the will to do it.

America First has some unfortunate and troubling historical parallels to the kind of isolationism that would have kept us out of the Second World War and allowed Nazis to continue their dominion over the continent of Europe had FDR not intervened.

But for the American voter who is tired of a political class that seems to put itself above the average worker, that theme resonates. Trump’s inaugural address might not win any awards for eloquence, but it hit the mark with his target audience.