The Tea Party Takes It on the Chin 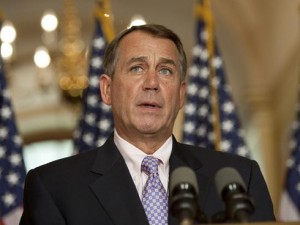 John Boehner won a complete and total victory in the House with an overwhelming vote to extend the debt limit.

His victory was so complete, many of his closest allies in the House could safely vote no to avoid primary fights next year.

House Democrats divided almost exactly in half, and their left wing is livid at the deal cut by the President.

The Tea Party, the rambunctious group of mostly second and third term members (and more than a few freshman) could only look on in anger and despair. They looked liked fools, their demands unrealistic, their rhetoric unnecessarily heated, their performance disappointing not only to their base, but also to Republican establishmentarians like me.

They demanded that the Senate pass a balanced budget amendment, but had to settle merely for a vote, a request that Harry Reid, the Senate Majority leader was more than happy to grant, over the grimace of Senate Minority Leader Mitch McConnell.

Imagine how hard it has been for McConnell to explain to Jim DeMint how he is trying to take back the Senate and that giving Reid a chance to give his moderates cover to vote yes on the balanced budget amendment only hurts the cause.

Instead of wasting their precious rhetoric on a balanced budget amendment, wouldn’t it have been better for the Tea Party to demand some tangible things, like an extension of the Bush tax cuts or some long-term entitlement reform? Or how about ten trillion in discretionary spending cuts over ten years (achieved by freezing spending for a decade at 2008 levels)?

They didn’t do that, and they missed an opportunity to really set the terms of the debate.

Of course, the Tea Party wasn’t the only unhappy voting block in the House. So were the so-called Progressives. They were furious that the bill contained deep cuts, and no tax increases (at least not in this bill). They believed that the President had let them down, and of course, they are right.

The left has decided that the best way to characterize this mis-deal (from their perspective), is to call the Tea Party terrorists. Somehow when liberals use that language, the media gives them a break, but when conservatives do it, they are called racists or worse.

For Boehner, it must be very satisfying to see the Democrats so deeply divided. He can also take some satisfaction in knowing that his biggest critics in the House, including Michele Bachmann, made fools of themselves as he proceeded to get the best deal possible for his Republican Conference.

The Tea Party certainly did not win this battle, and they frankly didn’t prove themselves worthy of victory. They have shown themselves, instead, to be fringe players, akin to the left wing of the Democratic caucus.

This was a total victory for establishment figures like John Boehner and Mitch McConnell. The losers include the Tea Party, a deeply divided Democratic Caucus and the President, who has seen his poll numbers drop like a rock in the last couple of weeks.