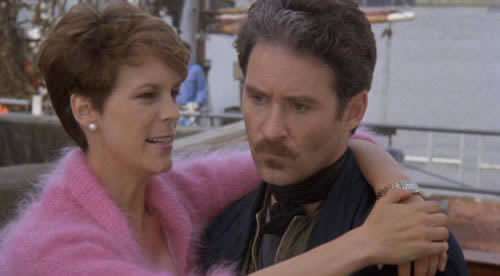 Wanda: Was it shrewd? Was it good tactics or was it stupid?

Wanda: Of course not! To call you stupid would be an insult to stupid people! I’ve known sheep that could out-wit you! I’ve worn dresses with higher IQ’s, but you think you’re an intellectual, don’t you ape?.... Let me correct you on a few things. Aristotle was not Belgian. The central message of Buddhism is not “Every Man for Himself.” And the London Underground is not a political movement. Those are all mistakes, Otto. I looked ’em up.”

I have been thinking about this great classic movie, “A Fish Called Wanda”, and Otto, played by Kevin Kline.

Otto was the thuggish American criminal who loved to spout philosophy and speak Italian, but as his sometime girlfriend, Wanda, played by Jamie Lee Curtis, pointed out, he was an idiot.

Otto hated to be called stupid, but he was stupid.

There is a large Otto caucus in America.

They hate to be called stupid, although they have only the most tenuous grasp of the elementary facts that face the country.

They are the ones who demand that the government get its hands off of its Medicare and Social Security checks.

They are the ones who believe that Barack Obama was born in Kenya.

They are the ones who believed at one point in time that Michelle Bachmann would have made a good President.

The leader of the Otto Caucus is Sarah Palin.

Nobody spews more non-sense than the former Vice Presidential nominee. She is home-spun, she is folksy, and she is the perfect Otto.

There is a lot of frustration out there about the state of our economy, especially among those who never went to college. And the simple fact is that if you don’t have the skills to compete in this Age of Information, you aren’t going to make much money.

That basic fact has been a long time in development, although the typical Otto Caucus member blames President Obama and immigrants for that reality.

They also blame the political establishment on both sides of the aisle. Jeb Bush is feeling the brunt of that anger and it is reflected in the polls.

Bush has decided to take on Trump, which isn’t necessarily a bad strategy.

But Bush shouldn’t spend his time making ad hominem attacks on the current leader in the polls.

Sure, Trump is the chaos candidate and yes, he might be a jerk. But for a group of voters who have given up on the political process and who see Trump is the perfect vehicle for a protest vote, those attacks largely fall flat.

I would recommend instead that Bush walk through the stakes of the election, his strategy for winning it and explain carefully why a vote for Trump is actually a complete waste and counter-productive.

The same strategy works for Ted Cruz, who I actually think is the bigger strategic threat.

Jeb has the capabilities of building a winning coalition that will beat Hillary. His plans to secure the border, work with Muslims to beat ISIS and work with the Congress to pass a reform agenda that will help make the American people more economically secure can be a winner.

Just don’t call Trump and his supporters stupid. The Otto Caucus doesn’t like that.