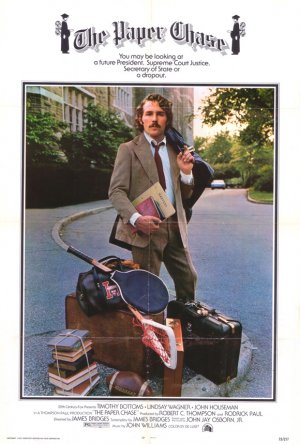 For those who don’t remember, Mr. Bell was the brilliant, eccentric and completely anti-social first year law student in one of my favorite movies, The Paper Chase.

But it was Willis Bell, played by Craig Richard Nelson, who most resembled the Freshman Senator from Texas and current contender for the White House.

Mr. Bell was the one who formed a study group with Mr. Hart and did his best to keep any inferior students from joining it. Bell was competitive, but was a complete jerk about it.

Bell was completely despicable and in the end, he got his due when all of his notes flew up in the air.

Ted Cruz famously would not allow anybody who didn’t go to either Princeton or Harvard into his study group.   At least Bell allowed Hart, who went to the University of Kansas (if memory serves), to study with him.

Imagine somebody who would only allow Princeton or Harvard grads into a study group.   That would be Ted Cruz.

And now he is masquerading as a Man of the People.

His wife works at Goldman Sachs (or at least did before the Presidential campaign started).   There is no more elite of a financial institution than Goldman Sachs, and she made a bundle.

I guess that’s why Cruz spends so much of his time attacking crony capitalism because if there is a group that has profited more from its relationship with the government, it’s Goldman Sachs. He knows about which he speaks.

I wanted to throttle the Washington Post cartoonist who attacked how Cruz uses his daughters during the campaign. How can anybody make this character sympathetic?

Well, the Washington Post did and Cruz skillfully turned it to his advantage.

Skillful is the one thing you can say about Ted Cruz.

He has skillfully become the most hated man in Washington, and has used the contempt that most people feel towards him to his advantage.

Being hated by Washington when Washington is hated by everybody else is truly a mark of genius (I guess).

His colleagues in the Senate would rather stick their fingers in their eyes than give Cruz a vote on anything of substance.

Donald Trump was right to question how Cruz would work with the Congress should the unthinkable happen and he became President. Cruz is not a maniac, but let’s just say that relations wouldn’t be smooth sailing between the Executive Branch and Legislative Branch should he ascend to the Oval Office.

At the end of the movie, it was Bell who got kicked out of the study group.