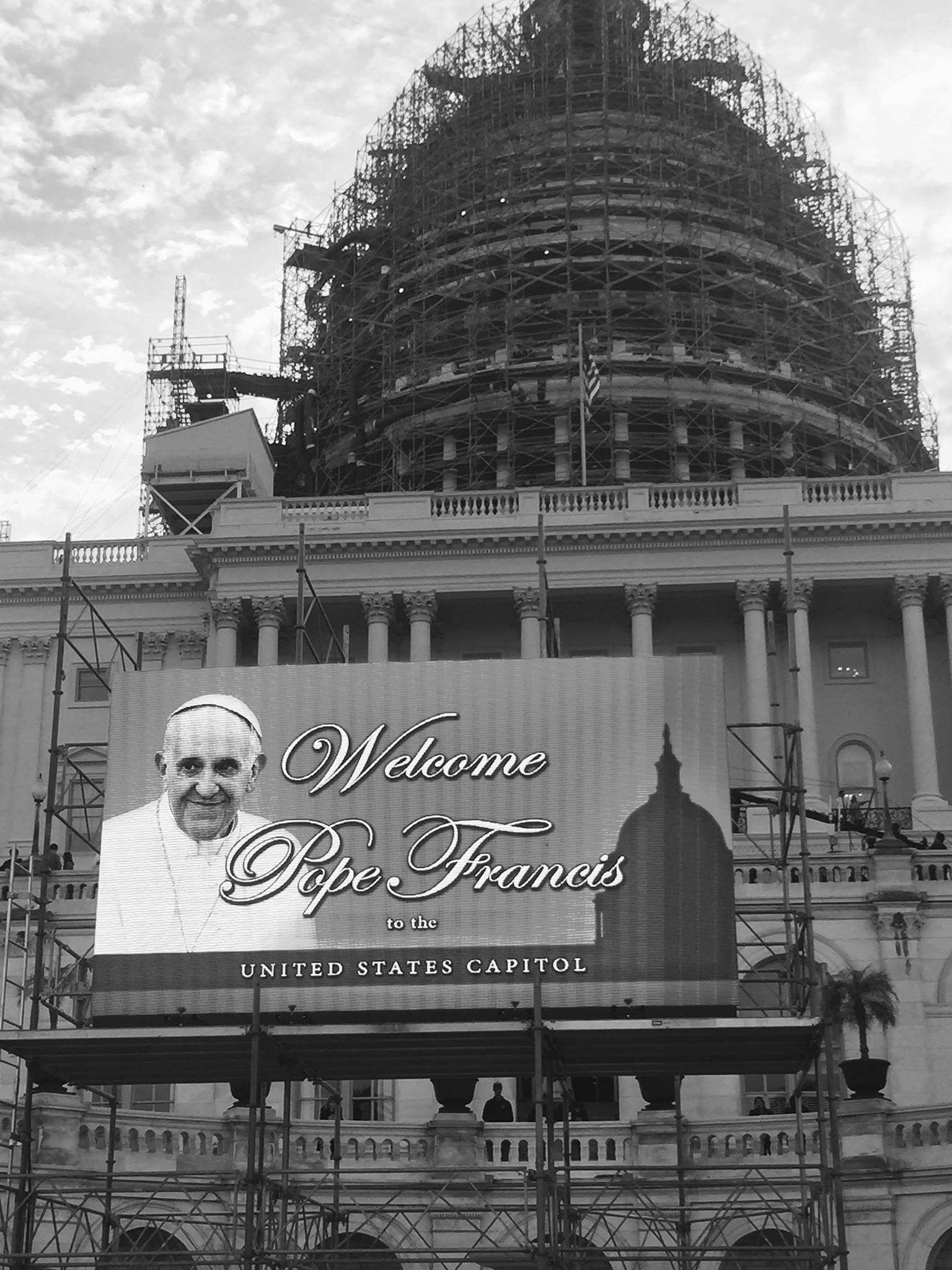 From the very beginning, it was the John Boehner show.

It was the embattled Republican Speaker of the House who invited Pope Francis to the Capitol. It was the Xavier University Graduate and his staff who planned every part of the day, from the Jumbo-trons on the West Front of the Capital to the last prayer by the Holy Father from the Speaker’s balcony.

I got there early in the morning, at the crack of dawn. We were told that the gates were going to close at 7:30 am and we didn’t want to miss it. We ran into two nuns who teach at my son’s Catholic Grade School as we walked to our seats. They were ecstatic. And their obvious excitement filled our hearts with joy, despite the early arrival.

The morning air, at that juncture, was crisp, the sky was clear, with blue skies and only a few harmless clouds. It was Pope weather.

A military band started playing patriotic tunes at around 7:30, as the crowds gathered and the seats filled up. A nice touch by the Speaker and his office.

Around 9:20, the Pope left the Vatican embassy and started to shake hands with the assembled crowd gathered there. It was all broadcast on the huge televisions, and some people mistakenly thought that the Pope was on the West Front. They pressed forward, only to figure out that the Pope still hadn’t arrived.

A bit later, the Pontiff’s Fiat cruised through on the House side. It’s appearance elicited a laugh when it appeared on the television, as its size was noticeably smaller than the big SUV’s that preceded and followed it.  If Fiat doesn’t make a commercial from this, they are idiots.

It was at that moment that it became clear to the uninitiated that this was the Boehner show. He was shown in a ceremonial office, fidgeting like a groom waiting for his bride. He cracked some jokes and looked skyward as he waited for Francis to be escorted to the holding room.

When the Pope arrived, he was escorted by a bevy of Cardinals. Real ones, not the Appropriations Subcommittee Chairmen. The Pope and the Speaker exchanged pleasantries and a photo op and the cameras were then escorted out of the room.

The next shot on the television was of the Senate lining up to enter the House Chamber. They waited more than a few minutes, accentuating the perception that this was indeed the Speaker’s Show. Next came the White House Staff and Cabinet, which seemed to be well represented (if not exactly well-behaved), and then the Supreme Court (which is now majority Catholic).

The Pope’s appearance on the House floor brought cheers from the crowd, although Members of Congress were strangely stand-offish, as if they didn’t know how to approach the Pontiff. Average Americans have no such hesitation, especially children, who are more than willing to give him a hug, a kiss or take a selfie with him.

The Pope’s speech was nuanced, complex, interesting and largely a mystery to law makers who couldn’t quite make out what he was saying. Who is Thomas Merton? I think I heard of Dorothy Day, somewhere.

Thankfully, for those sitting outside, the big televisions had English subtitles, which was great for those of us who speak English, maybe not so good for the pretty big percentage in the audience who were Spanish-speakers.

Here were some of my favorite excerpts from the speech:

Much has been written about this speech. The New York Times has already declared that it skewed to the left. The hard right, who like to believe the worst in this Pope (for reasons that are either inexplicable or explained by an antipathy and bigotry against Catholics, ala Ann Coulter), has prematurely declared that he is a Marxist or worse, a tool for President Obama.

He is neither and his speech reflected an uncommon understanding of the complexities that face the world. The Pope is not content with easy explanations or easy solutions or worse, the kind of political demagoguery that tends to typify the American polity.

And the Pontiff is wise enough to know that while this world is not perfectable, there is room for vast improvement. I liked that Francis was hopeful about the future, hopeful about America’s role in shaping it and generally upbeat.

At the end of his speech, he entered Statuary Hall, where he stopped to take a quick gander at the Statue of the Missionary that he had declared a Saint the Day before. He didn’t know exactly what to do there, so he looked at it for a couple minutes before making his way to the Speaker’s Balcony.

I don’t know if it was completely appropriate for the Pope to say a prayer as he looked over the throngs of people who had gathered for several hours to see and hear from him. But as a Catholic, it was really, really cool.

And John Boehner was there, gushing like a baby, overwhelmed by the emotion of it all.

And I must admit, I got a tear in my eye as well. For Catholics everywhere, this was a big, big moment. And it was thanks to the leadership of John Boehner, and the willing grace of his Holiness, Pope Francis, the Bishop of Rome.