The Curious Defense of Islam 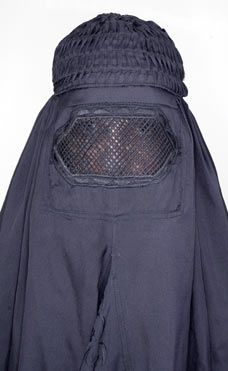 On the front page of the New York Times this morning there appears a frightening story about how a young couple that eloped in Afghanistan was stoned to death for breaking Sharia law.

In the rest of the paper, you can find various liberals defending the building of a mosque adjacent to the 9/11 sight.

Islam is not a religion for liberals.  While some earlier forms of the religion may have had a substantial role for women, the current version pretty much keeps the fairer sex locked up in a holding cell until they get married.

It is ridiculous.  These are not just quaint customs.  They are part and parcel of a conservative religion that finds that any new ideas that sprung up past the 14th century are morally bankrupt and evidence of hedonism.

Why would liberals defend this?

Islam makes the most conservative Catholic, the most fundamentalist Southern Baptist look positively enlightened and progressive.

Islam doesn’t really cotton to other religions.  Sure, there are the Sufis, the mystical Muslims, who think we can all just get along, but the Sufis are not much of a player in the world of Islamic power.  There is an interesting op-ed in the Times about how the 9/11 mosque is a Sufi-creation.  That may be the case, but it is largely irrelevant.  They will be pushed out by the extremists, eventually.

If you are not Islamic and you live in an Islamic state, you can survive, but you have to pay a tax and you can’t vote or own property.  That’s how they roll.

The goal of Islam is not to coexist.  The goal is to conquer.  This is not a religion that survives by going along to get along.  It is a violent religion.  And it is most violent against their co-religionists.  The Sunni and the Shia hate each other, perhaps more than they hate Christians (although not more than they hate the Jews).  Most of the people who die violently in Holy Wars these days are Muslims who are killed by other Muslims.

That is why I find it curious that the liberal left has risen so passionately in defense of this Islamic center. I did a television show with Joan Walsh yesterday, and she offensively compared the struggle of Catholics to gain acceptance in America to this effort by Muslims to build a mosque on the 9/11 site.  There is no comparison. Catholics didn’t promise a jihad against America.  They didn’t kill 3000 people in a suicide mission.  They didn’t promise to impose Sharia law.  And Catholic theologians, like Thomas Aquinas and Saint Augustine, created the intellectual and moral foundations that eventually led to the Enlightenment.  Joan would probably respond that there is a moral equivalence between a Catholic Church that doesn’t allow women to become priests, and an Islamic religion that doesn’t allow women to appear in public alone, but I, for one, don’t see the moral equivalence at all.

The people who want to build the 9/11 Mosque have taken to call it the Cordoba Center.  Cordoba is a sore point in Islam, because it represents the past glory of an Islamic Caliphate that included a substantial portion of Europe, most importantly Spain.  That an Islamic imam wants to build a new Cordoba on the site of radical Islam’s most important strike against the American empire is instructive.  This isn’t about peaceful coexistence.  This is about a symbolic victory for Islamists everywhere.

I for one, would rather not give them this victory.

Liberals passionately defend the rights for Muslims to practice their religious faith in America.  I get it, but I wonder if these liberals even know what Sharia law means to our way of life.  Sharia law is not some sort of benign, quaint set of beliefs that lets people live and let live.  It is proscriptive, demanding, tribal, unenlightened, and frankly pretty scary.

I think it is folly to think that we can send a message of strength to the more conservative elements of the Islamic movement by allowing them to build a shrine to 9/11 only two blocks from the site of one of our greatest national crimes, one that was committed in the name of Islam.

I am fairly certain that liberals will use a corollary of the Rousseau dictum “I do not agree with what you believe, but I will defend to the death your right to believe it.”  That works just fine as long as the other person practices the same philosophy. But that just isn’t the case with Islam. Its view is: “I do not agree with what you believe so I must kill you because you are an Infidel.”  That doesn’t sound very enlightened to me.