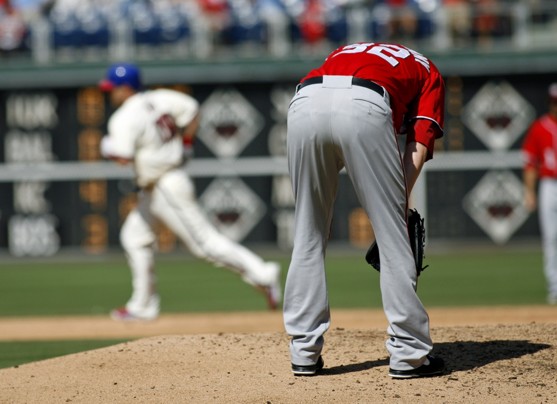 As I was leaving Nationals Stadium after the heart-breaking game five loss, I ran into some drunken and obnoxious and very unhappy fans, which I must say is unusual for a Nats game.

One couple (one man and one woman) was veering awfully close to fisticuffs with another fan, presumably a Cardinals fan, although there was no visible presence of any St. Louis regalia on his body.

The drunk guy (did I mention he was drunk) was pointing at the Cards fan, yelling at him, telling him to fuck off, and using a bunch of other non-polite terms to express his displeasure.  His girlfriend (or wife, or main squeeze or some chick he just picked up at the ball-park) chimed in, throwing some juicy spears of her own.

And then she found the best weapon she could come up with.  She accused him of having a very bad comb-over.  A comb-over.  Somehow, drunk women are always the best at finding the most defenseless part of a man’s anatomy, and besides the most obvious place to attack, the hair seems to be a particularly great spot.  Think Sampson and Delilah, except of course, for a lot less hair.

With the bald accusation of the combed-over Cards fan, other drunk fans joined in the fray. Yes, the son-of-a-pitch with the comb-over was the reason Drew Storen had blown the biggest save opportunity of his career.  The follicly deficient Red Bird booster was the evil genius behind Davy Johnson’s decision to put in Jackson as a reliever.  It was that jerk who made Ian Desmond bungle the game-winning ground ball.

And the combed-over dude deserved to die as a result.

Well, not really.  If we were in Philly, well then maybe there would have been some serious repercussions for that poor sucker, but in DC, the drunk fans rapidly lost interest in pursuing any further unpleasantries, and eventually the furor died done.

Kind of like the Obama attacks on Bain Capital.

Finding a scapegoat is a fascinating feature in World History.

ESPN (or was it HBO) ran a short movie about Steve Bartman, the Cubs fan who interfered with a foul ball, blowing a potential out for the hapless Cubbies.  After that one misplay, the Cubs collapsed in heap, and blew their best chance to get to the World Series in 80 years (or so).

It was on that show that I learned about the historical significance of the scapegoat.   According to Wikipedia:  “In ancient Greece a cripple or beggar or criminal (the pharmakos) was cast out of the community, either in response to a natural disaster (such as a plague, famine or an invasion) or in response to a calendrical crisis (such as the end of the year). In the Bible, the scapegoat was a goat that was designated (Hebrew לַעֲזָאזֵֽל ) la-aza'zeyl to be outcast in the desert as part of the ceremonies of the Day of Atonement, that began during the Exodus with the original Tabernacle and continued through the times of the temples in Jerusalem.”

The Obama campaign has tried to make Bain Capital a scapegoat for the financial crisis of 20079.   And then they tried to link Mitt Romney to Bain Capital.

The problem for Obama is that Bain Capital had little if anything to do with the financial crisis of 2009, and if it did, Mitt Romney had been gone from that place for over a decade.

The whole thing was ridiculous, kind of like the drunks blaming the comb-over dude for the Nats loss.    And just like that little incident, the Bain Capital attacks blew over pretty quickly.