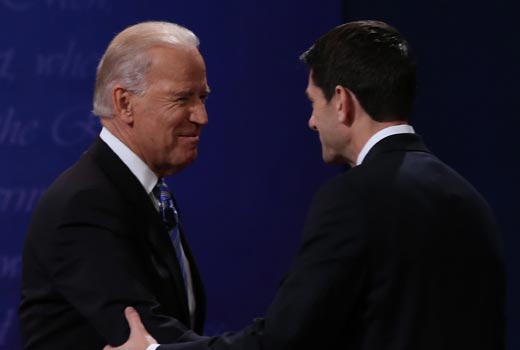 The most famous debate put-down in history came when Lloyd Bentsen tore into Dan Quayle, who, let’s face it, was no Jack Kennedy.

Quayle looked like a fool, but his playing partner still won the election.

The highest-rated Vice Presidential debate had can-I-call-you Joe Biden and Sarah Palin.  Palin exceeded all expectations and won the debate on style points, but that had no measurable effect on the trajectory of John McCain’s ultimate defeat.

Last night had all of the makings of a really bad Thanksgiving dinner.

Paul Ryan played the role of smart-ass college student, just back from his fancy university life.  Joe Biden was the drunk uncle who resented the kid for the college education he could never afford.

Biden wouldn’t let the college kid get a word in edge-wise.  He smirked, he guffawed, he laughed, he completely disrespected his younger colleague.

Ryan was respectful and looked like he was having a good time, but you knew inside he thought the old man was off his rocker.

This was an inner-tribal and inter-generational battle, two Irish Catholics fighting for the soul of their parties, their church and their Gaelic heritage.   And as in most Irish brawls, the facts didn’t matter nearly as much as the passion with which they were expressed.

It is too bad that Martha Raddatz, the moderator,  didn’t ask about Ireland.  She asked about every other foreign policy issue.  Paul Ryan isn’t a foreign policy guy; he’s a budget guy.  So, this was foreign territory for him.  He acquitted himself pretty well, but he was much better when he was talking about budget stuff.

Raddatz seemed like the drunk Irish aunt, asking maudlin and inappropriate questions at odd times.  The last question, for example, where she asked something about what unique thing the two candidates could bring to body politic.

Raddatz also seemed to gang up on Paul Ryan at key moments in the debate.  Her most pointed questions were to the young upstart, and she frequently let Biden get away with badgering the witness.

In the end, the debate was hard to watch.

It was classless performance, in my view.

Being a jerk plays well with the Democratic base, and there will be a lot of pressure for Obama to emulate his Vice President.  I think that would be a huge mistake on his part.  Being a jerk doesn’t play that well with swing voters.