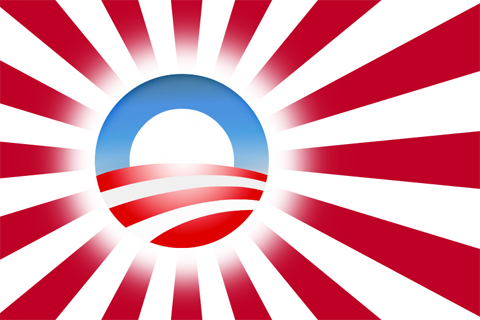 That was an actual conversation I had with a high-ranking studio executive a couple years ago about Barack Hussein Obama.

I believed that he believed what he said, his passion for Obama was so intense.

And for many liberal Democrats, Barack Obama became more than a man.  He became the distillation of all of their hopes, their aspirations and their dreams.

He became bigger than life.

It helped disperse the iconic multi-color photograph of a younger Obama.  He looked revolutionary, in Che kind of way.

It came up with the O symbol, that had the look of a rising sun, giving the impression that he was risen one.

The Obama mythology didn’t just capture the imagination of the left.  The media also got caught up in it.  They too perpetuated the notion of a Barack Obama who was somehow predestined to become President.

The story line was so intoxicating that the press gallery refused to do much due diligence on Obama’s stunning lack of experience, his shady relationship with hucksters, con-men and radical preachers who hated America, his own murky past.

To the media, Obama was the one who would save America, and not even Hillary Clinton could stop him.

The right-wing has also been overcome by Obama hysteria.   They see him as the number one threat to God, Country, Gun ownership, the U.S. Constitution, and whatever religion they might practice.

As it turns out, Barack Obama is none of these things.

The first debate with Mitt Romney confirmed that last week.

And with that debate, the Obama mythology has been shattered irrevocably.

The Barack Obama the left thought it knew and loved would have never let Mitt Romney get away with his version of the truth as easily and as comfortably as the human Barack Obama did last week.

Some spinners in the Obama camp have tried to spin the story that Obama (the all-knowing, all-seeing Obama) knew exactly what he was doing.  He wanted Romney to get a false sense of security, he didn’t want to be too hard on the hapless Republican, he didn’t want to seem harsh to the independent voters.

Hogwash!  Obama did no such thing.  He got beat fair and square, and he didn’t just get beat, he was exposed as being unprepared, unfocused, and unexcited with the whole idea of being President.

It was as if he spent all 90 minutes looking at his watch (ala George H. W. Bush) wondering when this whole debacle was going to end.

The left-wing knew immediately that their Messiah was no Messiah at all, but just another politician, and not a very good one at that.  And they reacted negatively on just about every media platform.  Bill Maher, the HBO Comedian, basically asked for his one million dollar contribution to the Obama Team back.  The night line-up at MSNBC was this close to committing mass suicide at the conclusion of the debate.

They know that not only is the thrill gone, but so is the myth.

The media was similarly stunned.

Obama has won every political race except for one because of a wide variety of factors, chiefly the self immolation of his competitors.

He beat Alan Keyes in his first Senate race (need I say more on this score).

He gambled that the left-wing of the Democratic Party was going to be against the Iraq War (seems like a pretty smart gamble in hindsight) while his chief opponent – Hillary Clinton, continued to support it, making her unelectable in a very liberal primary environment.

He beat John McCain, who ran the worse political campaign in history, picked the worst Vice Presidential pick in history, ran into the worst financial crisis in history, and campaigned for the most unpopular war in history (ok, maybe Vietnam was more unpopular, but not by much).  And still McCain got 47% of the vote.

It is easy to see how the press would just assume that Romney would fall flat on his face in this debate, because that is how is had always happened for Obama.

Obama always wins.  But not this time.

And for the right-wing, who assume that Obama will win and then immediately seize all guns in America, expropriate all gold and then legalize pot, now have a more sane belief that Obama can be beaten by Mitt Romney.

This has made Republicans even more enthusiastic to vote, and given them hope that Obama can be beaten in this coming election.

That is what happens when a myth shatters.  The Obama mythology has come and gone, and now all we have is a contest between a Chicago politician and rich business guy who is much more moderate than the primaries would have you believe.  And that makes this race much more winnable for the rich business guy.