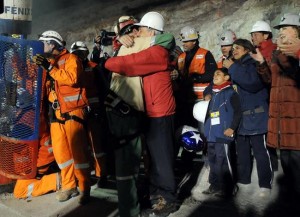 The rescue of the 33 miners from the middle of the Earth has inspired the world.

Luis Urzua, the foreman who kept the group together for 17 lonely days before they were discovered to still be alive above ground, subsisting only on peaches, tuna and biscuits, served as a kind of captain. He demanded that he be the last one to be rescued.

America actually played a constructive role in this drama. The Kansas City-based company, Layne Christensen, sent a drill crew and rig to Chile to help save the miners.

You have to wonder what would have happened had it been American miners trapped in an American mine. Would it have served to unite the country, as it seems to have united Chile, or would it have further inflamed partisan divisions?

Would President Obama have taken this as an opportunity to further blame President Bush for the world collapsing around him?

Would Eric Holder have immediately started finding ways to prosecute the mining company?

Would Democrats push for an end to all mining activities in the country, killing jobs for thousands of miners still working?

Would the Bravo channel launch a new show called “Real Housewives of the Trapped Miners”?

Would America accept help from any other country (like the Chileans did), or would we say, thanks but no thanks, we can do this ourselves?

Would Tea Party activists complain about how much government money was being spent to rescue these miners, who clearly should have taken more personal responsibility for their actions?

Would corporate America find a way to advertise? “This mining rescue moment is brought to you by the King of Beers”.

Would the media start speculating that the American equivalent of Luis Urzua run on the Presidential ticket with Sarah Palin?

This rescue of these Chilean miners has been a true inspiration. It has held the world spellbound, and it has made the survivors true heroic figures.

Perhaps we can learn something from the Chilean example. Not every event needs to become a partisan, ideological tussle. Not every drama needs to be exploited by the media. Sometimes a good story has a happy ending because it brings a country together. This is one of those examples.