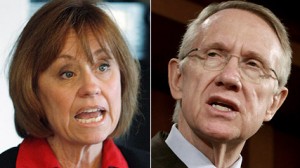 By all accounts, Sharron Angle beat Harry Reid like a scalded dog last night in their first debate. Coming after news that Angle raised close to 15 million dollars for her campaign in the last election, her improbable campaign is looking more and more like a winner.

Besides Angle, the hottest Republican candidates (as far as fundraising) are Meg Whitman, Carly Fiorina, Linda McMahon, Christine O’Donnell, Nicki Haley, Kristi Noem, and Michelle Bachmann. Now, not all of these candidates are my cup of tea (so to speak), but all of them have created quite a stir with the media and with contributors. All of them are attractive candidates who are good with the sound bite. And all of them are painting themselves as outsiders (and in some cases, way outsiders).

I bet if you did a poll, you would find that the vast majority of these candidates are polling much better with male voters than female voters. I have no scientific evidence to back this up, but my hunch is that because they mostly espouse traditionally conservative values, they don’t poll well with single women. I bet you they also don’t do as well as they could with married women.

When John McCain picked Sarah Palin, his campaign strategists salivated over the idea that then Alaska Governor would bring legions of women voters to the polls for him. It didn’t work out that way. If possible, the gender gap may have been even bigger than it was when George W. Bush ran in 2004.

This is a fascinating dynamic. Strong, principled, aggressive, tough, and in many cases, very wealthy conservative women are running hard and attracting men, especially supposedly sexist, Neanderthal, white men to their campaigns. That is how they were able to sweep through the primaries. But in almost every single case, they are running into tougher winds as they run to attract more female voters in the general election.

In any event, Sharron Angle, who has been called every synonym for crazy that the Reid campaign could think up, proved last night that she could hang with the Senate Majority Leader. Reid, on the other hand, proved that he is not only out of touch with his constituents; he is also out of touch with the concerns of most Americans around the country.

If Angle can get one out of every two women in Nevada to vote for her, she will win with 60 percent of the voter. I bet you even if she gets one out of three, she will be competitive. My guess is that she wins this election, and that while Democrats may want to call her cuckoo, come January, they will also have to call Senator Angle.