The Attack on Gillespie 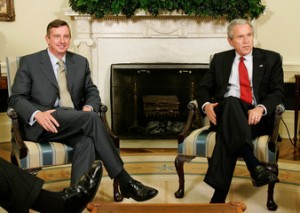 I have known Ed Gillespie for a long time. He is good guy. He is honest as the day is long. He is a hard worker. He is a smart strategist and he understands policy.

When President Bush called on him to work in White House, Gillespie left his thriving strategic advocacy firm (Quinn Gillespie, a firm that I will be joining at the end of this month in full disclosure), at considerable personal expense, to help out the President.

Gillespie felt that if called to service by the President, you don’t tell the President no. It is that sense of patriotic duty that drives Gillespie.

Sure, Ed is a conservative, but he has enough Democrats in his family tree to understand how Democrats think. He teamed with Jack Quinn to help him create his bipartisan firm, and he gets along famously with Terry McAuliffe, the former Democratic National Committee Chairman.

But that is not how the DNC sees it. They see Gillespie as the devil incarnate. They have a new ad that blasts Gillespie, Karl Rove (his predecessor in the White House), and, implausibly, the Chamber of Commerce, by accusing them of funneling secret money from China into political campaigns.

Gillespie is famous inside the beltway, but I doubt that most folks in Peoria would know who he is.

Then, I started thinking. Who is head of the DNC? Tim Kaine. Where is Tim Kaine from? Virginia? What is Tim Kaine going to do next? Possibly run for the Senate.

Well, none other than Ed Gillespie, who also lives in Virginia. Gillespie is being touted in some circles as a natural to run against either Mark Warner or more likely, Jim Webb. Kaine, who can’t be too excited with Webb’s performance as Senator, might very well run in a primary against him.

Are these DNC ads the first shot in the Senate campaign of 2012?

That makes more sense than the idea that these news ads are having any impact on this current midterm election.

Attacking the Chamber of Commerce makes no sense. Attacking Karl Rove, who is never going to run for office, makes little sense. Attacking Ed Gillespie? Well, that only makes sense in the mind of Tim Kaine, who sees a potential rival in the next election.

If I were a Democrat, I would be pretty angry that Tim Kaine is using DNC money to try to further his own career by running ads against Ed Gillespie. Of course, these days, I am pretty glad I am not a Democrat.