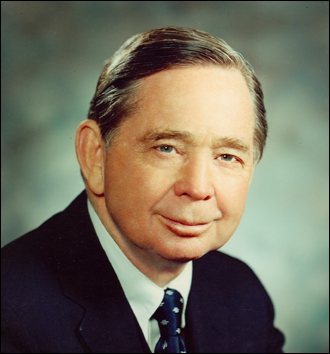 Not during the primary, mind you, but in the general.

McGovern was a terrible candidate, maybe even worse than Donald Trump.

He supported an alternative defense budget, which would have dangerously put America in a significantly weakened position against the Soviet Union. And he supported giving everybody a thousand-dollar welfare check, a proposal that made the South Dakota Senator a laughing stock throughout the country.

McGovern also made a huge mistake when naming Tom Eagleton his Vice Presidential choice. It was revealed that Eagleton had shock treatments to deal with recurring bouts of depression. Those revelations put the McGovern campaign on the defensive and raised serious questions about its competence.

But through it all, Carl Albert, the diminutive Oklahoman and Speaker of the House, kept his powder dry as he supported a nominee that was doomed to certain defeat.

Richard Nixon would get 60% of the popular vote, as McGovern would win only Massachusetts and the District of Columbia.

It was a total wipeout for the Democrats, except for the fact that it really wasn’t. As David Broder quoted Bob Dole in a Washington Post story the day after the election, “this is a personal triumph for Mr. Nixon -- and not a party triumph.”

I was thinking about the interplay between Congressional races and the Presidential race, amid concerns about the Trump campaign, and my thoughts turned to 1972.

And if the Trump campaign continues down the path it is going, it could be like 1972 again.

The Democratic Party was every bit then as screwed up as the Republican Party is today.

It had a no clear consensus on a policy agenda.

It had radicals who wanted to bring more power to the people, and conservatives who wanted a continuance of the seniority system.

It had big city pols who wanted to maintain their political patronage systems and rural legislators who needed pork for their state so it could survive.

It had war protesters and some war hawks.

And in 1972, after the dust was settled, it still had a majority in the House of Representatives and in the United States Senate.

The House wouldn’t fall to Republicans until 1994. The Senate would be toppled with the Reagan Revolution in 1980.

Another big reason though was the Democratic Party stretched itself, but it never broke in half.

And that’s a lesson to all of those Republicans who might want to start a new party in the age of Trump.

Parties that split lose their majorities and their ability to influence the national debate. Those that stay together, win together.

Now, it makes sense for party leaders to take a long hard look at resources and make hard-nosed calculations about where to make the best long-term bets.

In 1996, the RNC did exactly that when they decided that Bob Dole didn’t have much of a chance against Bill Clinton. Making the case for divided government or keeping a blank check away from Mrs. Clinton is absolutely appropriate.

As the Wall Street Journal puts it today, “If they can’t get Mr. Trump to change his act by Labor Day, the GOP will have no choice but to write off the nominee as hopeless and focus on salvaging the Senate and House and other down-ballot races. As for Mr. Trump, he needs to stop blaming everyone else and decide if he wants to behave like someone who wants to be President—or turn the nomination over to Mike Pence.”

It’s hard to know if Trump has it in him to act Presidential. He seems to believe that he can win the White House by using all of the skills he gained during the production of Celebrity Apprentice.

But no matter how uncomfortable it might be for Speaker Paul Ryan or Majority Leader Mitch McConnell, they should just think how tough things were for Carl Albert.

He kept his head down, kept supporting his nominee and kept his majority.