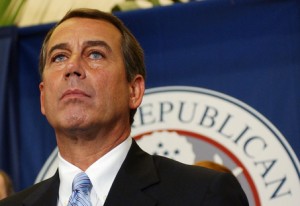 The House of Representatives votes to repeal a massive, intrusive, expensive new health care law, and the press calls it symbolic.

John Boehner, Mitch McConnell and, umm, (Harry Reid, the Democratic Leader of the Senate) decide not to attend to the state dinner honoring the President of China, and the press calls this a Republican snub of Mr. Obama.

The President calls for unity in a emotional speech, just as his allies attack Speaker Boehner for not joining Mr. Obama on cross-country flight to Arizona, and the press accuses Mr. Boehner of being partisan.

Sarah Palin is crowned by the press as the lead spokesperson for the Republican Party, despite the fact that she spends much of her time attacking the Republican establishment, has terrible poll numbers, and has never said that she is running for President.

It should be no surprise that the President’s poll numbers are rising a bit.

The economy is gaining strength because the socialists have been swept from power in the House of Representatives. The business community is breathing an extended sigh of relief and now starting to move forward.

It doesn’t hurt the President that the media is once again playing an active role in his so-called comeback story.

The President’s chief foil, as portrayed in the media, is not John Boehner or Eric Cantor or Mitch McConnell or Mitt Romney. Nope, the press has picked Sarah Palin because they know that Palin is our worst spokesperson.

We don’t know if this health care vote is symbolic or not. If the Senate decides to repeal any portions of Obamacare, the House could go to conference with their full repeal. And then the bargaining starts. Is that symbolic? I don’t think so.

Is it significant that John Boehner doesn’t jump every time President Obama calls? Well, Boehner is a pretty busy guy. He has a huge new class of freshmen members of Congress and they have a pretty important agenda. Mr. Boehner doesn’t work for Mr. Obama. They are the leaders of two co-equal branches of government. If Boehner would rather spend his time getting his own house in order, I think that is a good thing.

There was a scene in “All the President’s Men,” where Hal Holbrooke, playing Deep Throat, says something to the effect that the Nixon White House wanted to run against George McGovern, so that is who they ran against.

The media wants Obama to run against Sarah Palin, and so, right now, that is who he will be running against.

But that is not who is going to get the nomination.

When it comes to objectivity, the media has its thumb on the Obama side of the scale. This is no surprise of course, but these three examples are but further evidence of a left-wing bias in the Fourth Estate.