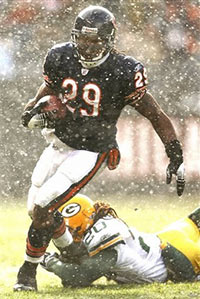 The Bears play the Packers in the NFC championship.

They will be in the bitter cold, probably with a good deal of snow, a lot of grunting and a lot of hitting.

It will be old school football, bringing back memories of George Halas and Vince Lombardi.

This will be the first time in the modern era that the Bears have played the Packers in the playoffs. They played each other in the 1940s, but that was when there wasn’t an AFC.

I think there is an AFC championship game, too, but nobody cares about that.

Now, the past always looks better, more comforting than the future, chiefly because we all somehow survived the old days. And I am sure that back in the 1950’s and 1960’s, when the Bears and the Packers were in their heyday, there were all kinds of things that went wrong with our country.

But at least America still kicked ass and took names.

This Bears-Packers game is more than just a football game. It is bigger than just Wisconsin and Illinois. People from all over the world are intensely interested in this particular game because it is old school. And what does old school mean?

It means being tough. It means not worrying if you skin your knee or have blood coming out of your ear. It means playing in the snow with only a tee shirt under your football pads (and that means even the wide-receivers).

Old school is so out of fashion in this day and age. Nobody takes responsibility for his or her actions. Honesty is for suckers. How can anybody be humble when every one of us is so interesting in the reality show era?

Neither Green Bay, Wisconsin nor Chicago, Illinois are enjoying the best of times. The manufacturing sector will never be what it was in the 1950’s. Chicago is going broke, literally. Unemployment is still persistently high. People are not nearly as optimistic about the future as they were in the 1950’s.

But this game, which puts the spotlight on these two cities and their legions of fans from across the globe, puts all those troubles in perspective. We still have football, and for that matter, we have old school football.

Old Style is the beer of the Chicago Bears fan and for good reason. This is old style football, in a new style era.

President Obama has weighed in on this game, and for the second time in my life, I agree with him. Go Bears!