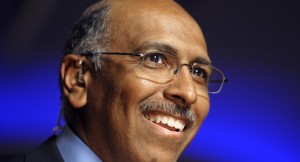 The RNC chairman made a stunning announcement on a conference call. | AP Photo

Michael Steele announced he was running again for RNC Chairman.

The members of the Committee have a simple choice.

They can keep the Committee relevant or they can close its doors.

If there is one lesson to be learned from this last election, it is that Republicans can win races without having a fully functioning Republican National Committee.

The GOP had its biggest night in House races in its history, and yet it still had several seats that it left on the table. It did very well in the Senate, but if it had a National Committee that was worth a damn, it might have done even better.

The party is resilient. Make no mistake about that.

When the big donors figured out that Steele was going to waste their money, they put their money in other places. They gave it to the RGA, the NRCC and the NRSC.

And they also gave to American Crossroads, the American Action Network, and a variety of other organizations that were dedicated to stopping the Obama Agenda.

Under Michael Steele, the RNC has fallen behind. It didn’t bother to put in place a 72 hour program to get out the vote. Steele was a gaffe machine, and his capable communications staff had to hide away from cameras for the last several months of the campaign. And the RNC now has a 15 million dollar debt that is going to be hard to pay off should Steele stay at the helm.

Michael Steele might very well win the race in January. He has doled out enough favors in far-off locales to buy some votes here and there. There is no consensus candidate out there among the GOP big hitters. Rove is backing one candidate, Haley Barbour is backing another, while Gillespie is backing a third.

I, for one, think that Maria Cino would do a great job of reforming the RNC to make it work again.

Keep in mind that for the next two years, Republicans don’t need a spokesperson at the RNC. They have Boehner as Speaker and plenty of competent and effective governors.

What they need is a Chairman who will be an honest broker for all the Presidential candidates, who will get the finances of the Committee in order, who will come up with a grass roots strategy that will help the Republicans compete with the Democrats in the next election, and somebody who has some real organizational skills.

That person is not Michael Steele.

I like Mike. I just don’t think he should be the Chairman again.