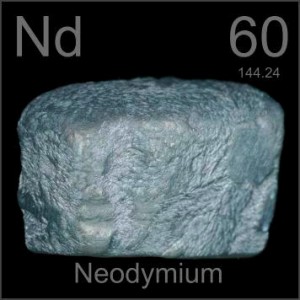 When you get up in morning and you are trying to find your cell phone, you probably aren’t thinking about Neodymium, but maybe you should.

According to Wikipedia: “Rare-earth magnets are strong permanent magnets made from alloys of rare earth elements. Developed in the 1970s and 80s, rare-earth magnets are the strongest type of permanent magnets made, substantially stronger than ferrite or alnico magnets. The magnetic field typically produced by rare-earth magnets can be in excess of 1.4 teslas, whereas ferrite or ceramic magnets typically exhibit fields of 0.5 to 1 tesla. There are two types: neodymium magnets and samarium-cobalt magnets. Rare earth magnets are extremely brittle and also vulnerable to corrosion, so they are usually plated or coated to protect them from breaking and chipping. The term "rare earth" can be misleading as these metals are not particularly rare or precious; they are about as abundant as tin or lead. Interest in rare earth compounds as permanent magnets began in 1966, when K. J. Strnat and G. Hoffer of the US Air Force Materials Laboratory discovered that YCo5 had by far the largest magnetic anisotropy constant of any material then known.”

The good news about Rare Earths is that they help make our lives easier, and in many ways, they hold the key to a greener, more environmentally efficient world. For example, many of the new “green technologies” rely on Rare Earths to work.

The bad news is that mining for Rare Earths can be a messy process, which is why most of it is produced now in China. In fact, about 95% of Rare Earth production is done in China and as one investment magazine put it: ““With China using nearly two-thirds of what it produces, it’s naturally keen to protect its own interests. The country is stockpiling its supplies and continuing to reduce annual exports of “rare earths.” The real concern is that within a few years China may decide to keep everything it produces.”

China has already started flexing its muscles when it comes to Rare Earths. It stopped the export of the minerals to Japan over the summer over an unrelated boundary dispute, causing the Japanese to quickly buckle. It has also slowed down shipments to the United States over the last several months, causing policy makers to take notice.

In fact, as the New York Times reports today, the Energy Department just released a report on the unfolding Rare Earth crisis. Here is what the Times had to say about the report: “The United States is too reliant on China for minerals crucial to new clean energy technologies, making the American economy vulnerable to shortages of materials needed for a range of green products — from compact fluorescent light bulbs to electric cars to giant wind turbines. So warns a detailed report to be released on Wednesday morning by the United States Energy Department. The report, which predicts that it could take 15 years to break American dependence on Chinese supplies, calls for the nation to increase research and expand diplomatic contacts to find alternative sources, and to develop ways to recycle the minerals or replace them with other materials.”
http://www.nytimes.com/2010/12/15/business/global/15rare.html?_r=1&ref=business

As the Congress tangles over issues like tax cuts, unemployment benefits, and pork barrel spending, and as the news media focuses on what Sarah Palin is wearing today, the Chinese are busy cornering the market on Rare Earths.

My prediction is that in 50 years, there will be a colony on the Moon that is there to mine Rare Minerals that are essential to the creation of the 10G iPhone. I don’t know who is going to own the mine, but if U.S. politicians don’t get their act together, it will probably be owned by the Chinese.

In the meantime, our nation ought to come up with a plan to stop the Chinese monopoly on Rare Earths back here on the Earth. We should have a plan on making certain that the Middle Kingdom doesn’t become the Rare Earth Empire which is able to dictate the terms of use to the rest of the world.