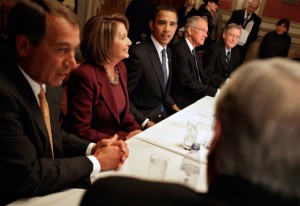 The deal the President cut with Mitch McConnell is a sign of things to come for soon to be ex-Speaker Nancy Pelosi.

Obama announced that he had a deal to extend the Bush tax cuts (or prevent tax increases, if you prefer) and at the same time, extend unemployment insurance to 99 weeks for slightly more than a year. There are also a variety of other cats and dogs included in the package, including a package of tax extenders that various industries desperately needed.

While the White House might spin it, this is a complete victory for McConnell. He knew that he wasn’t going to get a permanent extension of the tax cuts, and a two year extension was about as good as it was going to get for the GOP.

This takes U.I. off the table for a year, which gives House Republicans time to figure out how they are going to deal with this issue when it inevitably comes up. This insurance program is now threatening to become a pale version of welfare, and Republicans need to find a way to tweak the program to make certain that it is actually working to put people back to work.

This deal also insures that the tax debate will be part of the conversation when the next Presidential election heats up. Hopefully, the Republican nominee will promote a tax reform plan that will actually make our economy more competitive. The Bush tax cuts were fine, but they could be improved to actually give our companies a better chance to thrive and create jobs for the American people. Repatriating billions of dollars of revenue that is currently sitting overseas needs to be an important part of this solution.

Obama is telling Pelosi to pass this package that undoubtedly her caucus hates. That can’t be very fun for her. She is used to getting her way. And she is not the type to salute when the President tells her to do something.

So, we will see if the deal gets done in the lame duck or if it has to wait until after John Boehner is sworn in as Speaker in January. Maybe Pelosi tells the President to take a hike. Of course, that would lead to all kinds of confusion with tax tables and it will make the IRS’s job even more difficult. But, from Pelosi’s point of view, so what? That’s not her problem.

I worked for a Minority Leader (Bob Michel) who served when he had a President of his own party, and then when he had a President of the other party. Frankly, it is a lot more fun when you are the true opposition leader. It can be very frustrating when your President cuts deals with your opponents when you are out of the room. Pelosi better get used to being very frustrated, because this is going to happen often in the next two years.

This is why most Speakers, when they lose their majority, retire rather than become Minority Leader. Pelosi says she wants to keep fighting. Well, she better get used to fighting not only Republicans, but also her own President, if she is going to make an impact these next two years.