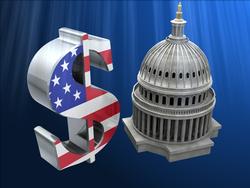 The Democrats called it a sham vote.

Yesterday, the House voted down an increase in the debt ceiling. The President asked for such a vote, and the Speaker complied.

But everyone knew it was a sham and it was.

But sham votes are not unusual in the Congress. Weeks before, the Senate majority leader brought a vote on Paul Ryan's Medicare plan. He voted against it as did every Democrat. That too was a sham vote.

The problem with our Constitution is that it includes the Senate in the first place. The Senate doesn't do anything and when it does do something, it is usually the wrong thing, but I am a House guy, so I am biased.

The debate on the debt ceiling has been a complete sham. We have to do two things to be fiscally responsible. We have to cut spending and we have to raise taxes. Pretty simple, unless you believe in fairy tales.

We are at 50 year low when it comes to paying taxes as a percentage of GDP. We are engaged in a global war on terror that is costing us more money in real dollars than any war in our history. And we are spending more money on retirement insurance programs than any nation in the history of the earth. And yet, nobody wants to raise taxes, pay for the war or reign in entitlement spending. No politician. No pundit. No concerned citizen.

I am glad that the House voted down this sham effort to raise the debt ceiling. I am glad they voted down the Ryan Medicare plan. I wish they would vote to slash their salaries. That is always a nice gratuitous
political exercise.

Hopefully, at some point the sham will stop and we will make some progress, but I am not holding my breath.