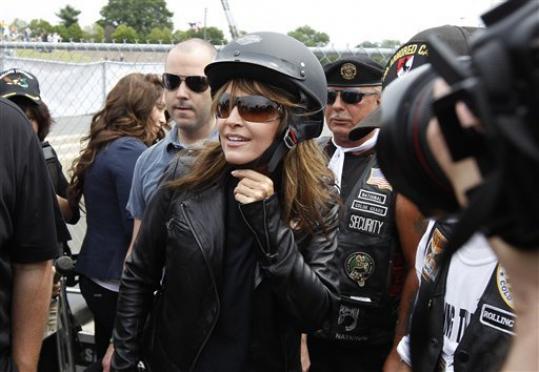 Riding my rented bike through the crowd of motorcyclists over the weekend provoked two thoughts: My bike was no match for their hogs, and my shorts and tee-shirt didn’t quite fit in with their duds.

Every Memorial Day, thousands of bikers from around the country flock to Washington D.C. to pay tribute to those who paid the ultimate sacrifice to protect their country. Quite often, traffic shuts down, which is why I was riding my rented bike.

Most of these bikers play the role of the hard-core motorcycle gang member, with their tattoos and their leather regalia. But it is just a role. When they go back home, in all likelihood, they are just normal middle class Americans.

She, too, was wearing leather, and she too was playing a role. We just haven’t figured out what that role will be.

She is the most pro-gun, pro-hunting, pro-fishing, pro-motorcycle riding, pro-military, anti-abortion, anti-EPA, anti-tax candidate in the Republican field. Not too many shades of gray in the Sarah Palin world. You are either with her or against her.

Her visit with Rolling Thunder was perfect.

She didn’t say much to get her in trouble, which for Palin is a real positive. And the video of her rolling with rolling thunder was priceless.

In one sense, I hope Palin runs for President. I don’t want her to win the nomination, but I would love to see how well she competes with Michelle Bachman for the full attention of the media.

The best-case scenario would be if Palin splits the Iowa caucus vote with Bachmann, gets trounced in New Hampshire, loses South Carolina and then fades away.

A Palin that loses is much less compelling than a Palin who doesn’t run.

And then we could get on with the rest of the field.

I want a candidate that can beat Barack Obama. I don’t particularly care who it is, just somebody who believes in the free market, believes that government is too big and spends too much, believes that we need to fundamentally rethink what our social safety net is and who it helps, and has a long history as a problem solver.

I might agree with Mrs. Palin on many of the big issues that face the country, but that doesn’t mean I think she is capable of being President. The fact that John McCain still says she is qualified is embarrassing to him and to the party in general.

Is there lightening that will accompany the thunder? Will Palin make the leap and make a run for President?

I say to Mrs. Palin: Make a run for it. Let’s see what you got in that engine of yours. Let’s really get the thunder rolling.