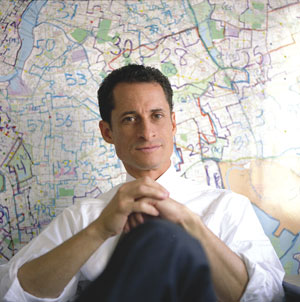 Anthony Weiner, the voluble Congressman from New York, may or may not have been caught with his pants down. Nobody knows for sure, but it sure makes for a great media story.

The gist of the story is that a picture of Weiner in his underwear was sent, via Twitter, to a co-ed across the country. But several questions have been raised. Is it really Weiner? (The picture shows only the underwear portion. He isn’t saying it is and he isn’t saying it isn’t.). Did Weiner Tweet the picture? (He says he didn’t.)

The most important question, though, is: Who cares?

I certainly don’t care. If Mr. Weiner wants to Twitter a picture of his package wrapped up in tighty whities to somebody over the age of 18, why do I care?

Some Republicans think that Mr. Weiner should face the same wrath that faced Chris Lee. But I got news for you guys. Weiner is not going to resign. Democrats don’t resign in the face of sex scandals (and this can hardly be classified as a sex scandal).

Democrats may or may not feel a sense of shame, but they certainly don’t translate that shame into resignation.

Dan Crane was caught having sex with a female page in the same scandal that caught Gerry Studds. He resigned.

Republican primary voters tend to be much less forgiving about sexual misdeeds than Democratic primary voters. If you have a sexual skeleton in your closet, and it comes out, the chances are you are screwed (politically, at least).

I don’t know what Anthony Weiner did or didn’t do, and I still don’t care.

I do know that he probably isn’t going anywhere because Democrats who face scandal tend to stay in office, long after the sex scandal has become old news.

I would love it if the media could some how stick to the real news, like how the Democratic Senate has no plans to do anything this year. Now that’s a real scandal.