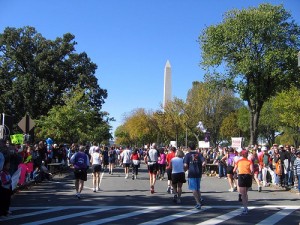 It was a pretty busy weekend here in our nation’s capital.

Jon Stewart brought his comedy routine to the National Mall on Saturday (along with Stephen Colbert). Thousands of runners ran around the monuments on Sunday morning for the Marine Corps Marathon. And it seemed liked thousands of little kids came around my house for some quality trick-or-treating on Sunday night.

I took my dog (Noodle the Poodle) for a walk into the Restore Sanity crowd on a beautiful Saturday afternoon, and I was struck by the crowd that marched in the opposite of lock-step around the Capitol grounds.

They were older than I thought they would be. From what I saw, most had graying hair. In fact, it seemed as if they were the ones who had been to Woodstock forty years ago, but had grown up, got a job, were now facing their retirement and they had a look on their face like they had just told their kids that smoking pot was bad for them.

They weren’t mad enough to be tea-partiers, and they weren’t poor enough to be marching for jobs. They were just self-satisfied enough to afford to be able to travel to Washington and protest, in a self-mocking way.

I overhead one woman who had a “Feingold for Senate” sticker on her jacket, say to another “protestor”, “I sure hope Russ wins.” Not many votes for Russ in Washington D.C., lady. If you cared that much for old Russ, maybe you should have stayed home and walked some precincts for him.

The Restore Sanity crowd was very heterogeneous in the sense, that everyone in the crowd had a different way to express their smugness. It represented all kinds of different political viewpoints and races and creeds, as long as you were a white Democrat who didn’t wear your religion on a sleeve.

Stewart likes to blame Washington for the lack of civility in the political discourse. To that I would make one observation: This is not a Washington problem. This is caused chiefly by cable shows that emanate from New York. Olbermann, Maddow, O’Reilly, Beck and Hannity, Rush and Ed Schultz all do their shows from the Big Apple, not from Washington D.C. In fact, the shows that originate from D.C., like Brett Baier, Chris Matthews, Wolf Blitzer, all tend to have more balanced presentations than the New York centric blabfests. If Cable is the problem, it is because the cable programs are coming from New York, not from D.C.

I am not sure how many of the marathoners came out to the previous days protest, but my guess is not many. The Marine Corps marathon is not for sissies. While it isn’t as hard as say, the Boston Marathon (I don’t have personal experience in Boston, but I did run the Marine Corps once), it is still a pretty hard track. There isn’t a lot of time for irony in a marathon, and the marathoners I talked to the night before were excited and a bit nervous. Any time to start a 26.2 mile run, you have to be a bit nervous.

For the kids, it is all about the anticipation. And walking up and down the street, asking for treats or promising tricks, can be exhausting. Kind of like asking for campaign contributions.

Halloween came two full days before the election, but for the Democrats, this marathon campaign is not going to end well for them.

The voters think that the best way to restore sanity to Washington is to vote the Democrats out of office. And that is what is going to happen tomorrow.