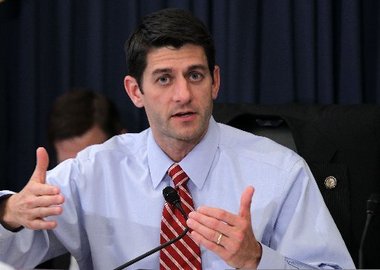 A Congressional budget doesn’t really do much.

It is a joint resolution, so it doesn’t really have the force of law.

It is an internal document.  It establishes spending targets for the Appropriations Committee for the year.  It sometimes includes procedural rules for the Senate to allow them to pass laws with a simple majority (these are called reconciliation instructions).

Theoretically, the House and the Senate are supposed to reach an agreement about what the spending targets are and if there will be reconciliation instructions.

In fact, the law stipulates that the Congress is required to reach such a conclusion on the budget every year.  Of course, the Senate has ignored that law for the last two years and is likely to ignore it again this year.

The Majority Leader doesn’t find much percentage in being courageous in an election year, and budgeting in his mind is an act of courage that he can do without.

Paul Ryan, on the other hand, is all about courage.

And his budget makes some tough calls about how the federal government needs to spend less.  He proposes that overall spending shrink as a percentage of GDP from the current levels of 24% to a more rational level of 20%.

The only way you can make that happen is to slow the growth of Medicare.  Medicare funding is out of control and if the government doesn’t find ways to limit its growth, the U.S. will go bankrupt.

None of this is very surprising.  Ryan such much the same thing last year.

What is surprising about the Ryan budget is his plug for tax reform.

The dirty little secret is that unless you are in the middle class, you really don’t pay taxes anymore.

The rich don’t pay taxes.  They hire tax accountants to shelter their money in the Cayman Island or in Switzerland.

In fact, half the country pays nothing in federal income taxes.

And the very rich.  Well, they probably pay a rate much like Mitt Romney’s, right around 15%.

The same is true for multi-nationals vs. retailers.  Multi-nationals can manipulate the tax code to pay a pretty low rate.  Retailers gets slammed.

What we need is an easy to understand and easier to implement tax code.    Rich people should pay at a 25% rate (which would probably be a tax increase for most of them) and everybody should pay at least at a 10% rate.

And no company should have to pay more than a quarter of their profits on taxes.

If that were to happen, I guarantee that revenues would flow into the Treasury, and we would go a long way to achieving the goal of a balanced budget.

Paul Ryan put it this way in his budget blueprint:   “A code with high rates and lots of loopholes benefits those who can afford the best lawyers and lobbyists in Washington. Instead of advocating for lower rates for all, those with political muscle usually take the path of least resistance by pushing for special deductions and carve-.‐outs.  This not only lowers their effective tax rates, but also enables them to use the complexities of the tax code to stack the deck against their competitors. There’s nothing fair about that.”

No, there isn’t.  I like the Ryan tax plan.  It doesn’t have many specifics (budgets never do), but I like the general outline of it.  Get everybody to pay their fair share.  Lower the rates.  Get rid of the boondoggles.  Makes sense to me.