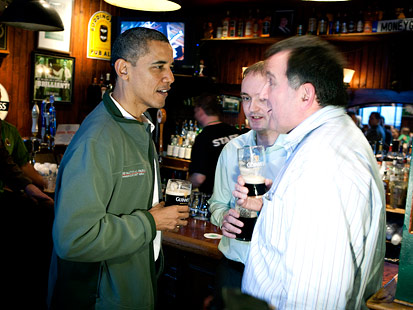 The president had a pint at the Dubliner Bar on St. Patrick’s Day.

It’s a good start, but if the president is going to recapture the Irish vote on Election Day, he is going to need to do more than drink a few Guinnesses with the lads.

The president has an Irish problem, and if he wants to win reelection, he is going to have to make some changes.

Now, I am not talking about the Irish in Ireland. They love O’Bama in the old sod, but that should come as no surprise. The man is still a rock star in most of Europe.

Obama’s problem with Irish Americans is emblematic of his problems with white ethnic voters. They were willing to give him a chance in the last election because the Republicans had so thoroughly bollixed up the economy and the wars. But polls show that they won’t be so willing to give him a pass this time around.

The president’s attack on the Catholic Church hasn’t helped.

Bill Daley, Obama’s former chief of staff, and Joe Biden both understood how bad this decision on the conscience clause really was to the Irish vote.

And no, it isn’t about contraception. Most Irish Catholics departed from the Holy Father’s script on birth control decades ago. It is about making the church do something it can’t do. The president might have thought that he had won this debate with the voting public. He hasn’t won it with Irish Americans, though.

Irish Catholics, like most Americans, don’t necessarily vote in blocs. The Irish used to vote lockstep for the Democrats, but that dynamic has changed over the last 40 years. More and more Irish are taking longer and longer looks at the Republicans, and many are growing more and more disgusted with the Democrats.

Now the Irish are the key swing vote. They voted in Obama in 2008, and they voted in the Republican Congress in 2010. Will they swing back this time around?

The president’s downfall with the Irish started when he called the Boston cop “stupid” for putting his buddy Skip Gates in the slammer. The president had the opportunity to weigh in on the side of law enforcement or on the side of academia. He chose unwisely. The “beer summit” was a lame attempt to make up for his faux pas, and it didn’t work.

Obama did have a nice trip to Ireland, where he was greeted warmly. But he didn’t say long, and the brevity of his trip didn’t sit well with folks back home. As the London Telegraph put it, “the Irish Americans will quite rightly view the trip as a desperate, last-ditch appeal to them.”

Fast-forward to this St Patrick’s Day.

Leading up to the High Holy Day of Irish America, Washington was festooned with the Union Jack all week.

The reason? David Cameron, the U.K. prime minister, was in town, and Obama almost embarrassed himself with his bromance of the Tory leader.

Cameron is young and energetic and good-looking, but he is a leader of a party that has been hostile to Irish plans for unification. Feting him might have made the president feel good, but it leaves Irish Americans feeling cold.

Worse, on the eve of St. Patrick’s Day, the administration released a refinement of his plans to box the Catholic Church in on the healthcare law. The move has infuriated church leaders and will likely lead to even more conflict on the issue.

Perhaps the administration thought nobody would be paying attention through all the pints they would be drinking. Perhaps the president thought he could make all OK by drinking a pint of Guinness at the Dubliner.