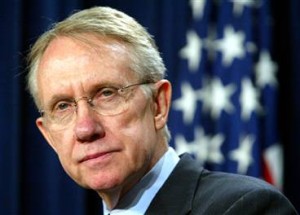 Harry Reid has taken the time this year to criticize the prostitution industry in his home state, but he hasn’t taken the time to finish last year’s budget in the Senate.

Talk about trying to change the subject.

Small towns in Nevada apparently (those under 400,000) can make whatever calls they want on the legality of Cat Houses, and many make them legal so that they can balance their municipal budgets.

I don’t think the Senate Majority Leader has that option at the federal level. And you can legalize every hooker from here to Sunday, and that’s not going to balance the Fed’s budget.

But you also can’t balance the budget if you don’t try. And last year, the Senate didn’t even give the budget a passing glance.

That is why the House Republicans had to clean up the mess. Senate Democrats may not like what the Republicans did in the lower chamber, but they have to respect the process by which they did it.

John Boehner let the House work its will. Members on both sides of the aisle presented their amendments, made their points, and voted their consciences and at the end of the day, the House passed a work product.

The Senate Leader has criticized the piece of work, but you can’t beat something with nothing. And thus far, Mr. Reid hasn’t come up with a strategy to let the Senate work its will in a similar fashion.

At the end of this week, the Senate and the House have to pass a continuing resolution to keep the government open. They will most likely pass a stop gap measure that will trim about four billion dollars from last year’s budget. And then they will have anywhere from 14 to 21 days before they face another government shut-down.

Here is my advice to Senator Reid. Let the Senate work its will.

Have a debate similar to the House debate. Let all the Senators take their shots and make their cases.

And then when it comes to reconciling with the House, go old school. Have a formal conference, where the Senate and House, in an open form, work out their differences. Allow the process to work like it is supposed to work, out in the open, like the House and Senate used to do.

Mr. Reid may very well profoundly disagree with the work product put together by the House, but he can’t beat something with nothing. Follow Mr. Boehner’s lead and let the process work like it is supposed to work.

And get to work on that right now.  No more distractions.