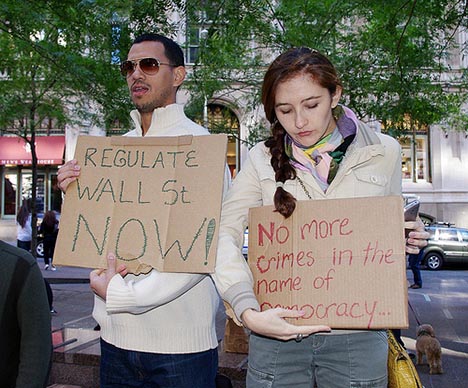 Apparently, Radiohead couldn’t get its schedule straight with the Occupy Wall Street protesters and they didn’t play for the grungy crowd last week. I am not hip enough to know exactly what kind of music the band plays, but I do know that a couple of years ago, the members of the band came up with a brilliant marketing strategy to sell one of its albums. "Pay what you want or pay nothing at all if that is what you want to do.” The band never released how much money it made by letting its fans name their own price, but they chose to not pursue the same strategy for their next album.

Despite the scheduling snafu, Radiohead still has endorsed the protest movement that seems to be gaining strength every day. For example, all of the government employee unions are now on board with Michael Moore and assorted other left-wing radicals to protest the money that Wall Street financiers make every day.

These Wall Street financiers and their other colleagues, known collectively by the collectivists as “the rich” or the “one-percenters”, pay about 30 to 35% of the taxes collected by the Federal government. Having the government employee unions protest against these prodigious tax-payers is somewhat akin to the protesting against the goose because he is not producing golden eggs fast enough.

Before the unions got involved, the rag-tag group of hemp-smoking hippies lacked cleared focus. It is clear, by their signs, that they don’t like capitalism. And, from anecdotal evidence, it is clear many of them would actually rather not work, despite their demands for more jobs. For example, one New York Times columnist reported on how one protester actually quit his job to join the protests because obviously it is far more fun to protest about the lack of jobs then it is to actually work at one.

This point was made dramatically by a front page story in the Old Gray Lady. Farmers in the west (actually all over the country) can’t get Americans to do the job of picking fruit and vegetables. Many of these farmers have tried, but they find that too many Americans simply won’t show up to work because the work is actually somewhat difficult. So, their only choice is to hire Mexicans or other immigrants from central America.

Michael Moore, who memorably protested when he didn't get paid enough in one of his anti-American documentaries, has done pretty well for himself as one of America's leading anti-capitalist capitalists, and my guess is that if you survey this crowd of protectors, you will find more than a few trust-funders among the crowd. Only the idle rich really can find the time to protest. The rest of us have to get to work.