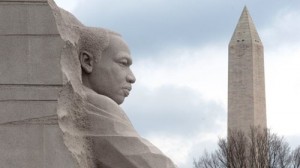 Hurricane Irene blew in to Washington over the weekend and the biggest casualty was the Martin Luther King Memorial ceremony.

It turns out that the weather was pretty nice on Sunday afternoon, and the event could have still occurred, but it is hard to predict the weather.

Are we as a country moving forward on the whole concept of racial harmony or are we moving backward?

I wonder if Alan West and Tim Scott, two of the most influential Tea Party members of Congress (who coincidentally happen to be black), want to hang their fellow Congressional Black Caucus members up a tree.

Carson believes that the Tea Party is to blame for the fact that unemployment is so high in the black community.

I find that hard to believe.

I guess it is far easier to blame a bunch of white conservatives than it is to blame the nation’s first black President.

The Tea Party hasn’t really had much of an impact on the President’s policies, not yet anyway.

Sure, the President has been forced to spend a little less than he would have if Democrats still ran things, but in the big scheme of things, he still is spending a lot more than George W. Bush ever did.

The fact is that the Democrats, with their regulatory madness, scared the hell out of the business community, and we are just now getting over it.

Racism is still a persistent problem in this country.

Racist black mobs have been going around big cities (Milwaukee, Philadelphia, Denver, Chicago etc), targeting white people and beating the hell out of them, for no other reason than they are white.

Here is one story from earlier this summer:

“Shaina Perry remembers the punch to her face, blood streaming from a cut over her eye, her backpack with her asthma inhaler, debit card and cellphone stolen, and then the laughter. They just said 'Oh, white girl bleeds a lot,' " said Perry, 22, who was attacked at Kilbourn Reservoir Park over the Fourth of July weekend.

Though Milwaukee Police Chief Edward Flynn noted Tuesday that crime is colorblind, he called the Sunday night looting of a convenience store near the park and beatings of a group of people who had gone to the park disturbing, outrageous and barbaric.

Police would not go quite as far as others in connecting the events; Flynn said several youths "might" be involved in both.

"We're not going to let any group of individuals terrorize or bully any of our neighborhoods," Flynn said.

Perry was among several who were injured by a mob they said beat and robbed them and threw full beer bottles while making racial taunts. The injured people were white; the attackers were African-American, witnesses said.

The Congressional Black Caucus has been going around the country, trying to fire up its political base and trying to cast blame for the horrific unemployment in their district on the Tea Party. Here is how one headline summed up the CBC’s pitch: ‘THIS IS WAR’ — CONGRESSIONAL BLACK CAUCUS TRAVELS US CITIES USING VIOLENT RHETORIC: DECLARES ‘WAR’ ON RACIST TEA PARTY, SAYS TEA PARTY WANTS TO LYNCH BLACKS, CALLS FOR BANK RUNS, CIVIL UNREST IN THEIR NEIGHBORHOODS AND HOMES.”

The nation’s first black President looks like he may be a one-termer. His approval rating is sinking among all groups (except for African-Americans, who have fared the worst under his Administration), but it is especially precipitous with white voters, who still make up the largest percent of the voting public.

The President hasn’t done much on the whole racial harmony thing. He had a beer summit, which was necessitated when he called a cop stupid for arresting his friend Skip Gates.

He hasn’t said a word about these flash mobs, hasn’t announced any programs to go after black on black crime (let alone black on white crime, which is rising every day).

He blames rich people for not paying enough taxes, but he ignores the fact that the reason most kids in the ghetto don’t have jobs is because they are unemployable.

He hasn’t said a word about the social pathologies that continue to fester and destroy generation after generation is many parts of the black underclass.

The President and the national media have largely ignored the barbaric attacks launched by black mobs against white citizens. Of course, they also largely ignore the daily (and horrific) carnage that happens in predominantly poor African-American community in every big city in the country.

But ignoring these problems won’t make things better for the country or for the President.

In the meantime, it is still a good time to be a racial instigator. Al Sharpton, for example, has his own show on MSNBC. Against my better judgment, I have appeared on his show on occasion. It says a lot about the status of civilized debate in the country that somebody like Sharpton could get his own show. You can reach your own conclusion.

For Obama, all seems well with black America. After all, he is the change that we were all waiting for. And indeed, if you are a college educated, smart African-American, who comes from a good family and has good values, this is a great time to be alive. You can get into best colleges and get a good job pretty easily, thanks to the wonders of affirmative action.

But if you come from a dysfunctional family unit, if your mom is on crack and you don’t know who your dad is, if you have little interest in finishing high school, if your only family is a gang, and if you fear for your life every day you step out the door because some joker just might shoot you, let’s face it, your life is not very pleasant and your future isn’t very bright. And there is no way you are going to find a job in a slow economy.

Raising taxes on the rich white people isn’t going to fix that problem, despite what Al Sharpton and President Obama might think. It might make some people feel better, but it certainly is not going to create any jobs.

The Martin Luther King Memorial ceremony has been postponed, which perhaps gives us a bit more time to think about his legacy and reflect on the current state of race relations in this country. It’s not all bad, but it’s not all good either.