Perry as The Duke 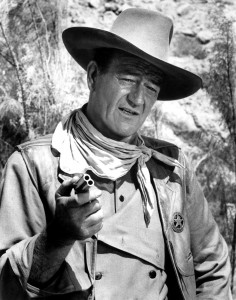 No matter which one of his movies comes on the television screen, I will stop what I am doing and watch it.

The Quiet Man is perhaps my favorite, but Rio Grande, The Searchers, She Wore a Yellow Ribbon, all are very close in my estimation.

Another favorite is The Man Who Shot Liberty Valance. I watched that classic western with my brother-in-law. It co-starred Jimmy Stewart as the intellectual lawyer who thought he could conquer the wild West and Lee Marvin as the evil and deadly Liberty Valance.

This is a great movie on many levels. John Wayne, of course, plays the tragic hero figure in the flick. He is the one who actually shoots Valance, but loses the girl. Stewart gets credit for killing Valance, wins the girl and ultimately becomes the successful politician who actually brings civilization to the lawless territory.

In real life, Jimmy Stewart was a hero in the Second World War. He flew multiple bombing missions against the Germans as a Captain of a B-52 squadrons, and he retired a general. John Wayne never killed anything in his life, except maybe a few bottles of tequila.

Both Wayne and Stewart were rock-ribbed Republicans, and both played key roles in American cinema and in American history.

I was thinking about John Wayne and Jimmy Stewart in the context of the current Republican primary.

Rick Perry is styling himself as a John Wayne. He has that Texas swagger. He packs a pistol when he runs. He loves to be tough. He aims to civilize those varmints in Washington.

Mitt Romney is much more of the Jimmy Stewart character. He has Dudley Do-Right looks. He doesn’t do the macho thing. He seems a bit intellectual (as in he has read a few books in his time). Sure, he’s a member of the NRA, but he doesn’t pack a 6-shooter when he goes for a jog.

Perry is politically incorrect, and I guess that has its own appeal in the world of American politics. Unless, of course, you want to win a general election.

Both Perry and Romney are playing to heroic American arch-types. Perry is the gun-slinging cowboy, Romney the successful capitalist.

I am not quite sure how this will play out in the election. But I do know how it played out in the movie. The leading lady was supposed to fall for Wayne’s character, but she ended up falling in love with Jimmy Stewart.

At the end of the day, will Republicans support the macho Perry or the more cerebral Romney? And will that be enough to make a difference.