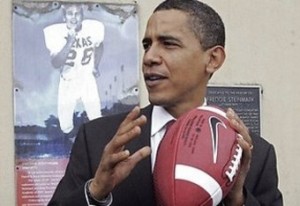 There is a difference between these two statements.

"I am coming over to your house to watch the football game." AND

"Hey, can I come over to your house and watch the football game?"

President Obama opted for the first statement when he invited himself over to John Boehner's house to give a "big speech" on jobs and the economy."

Usually, a President asks for an invitation from the Speaker before he announces he is giving an address to Congress.

Why is that? Because Congress is co-equal to the executive branch. The President doesn't run the Congress, although many tend to wish that the Congress would just go away after giving them a blank check.

Mr. Obama and Mr. Boehner eventually agreed to a better date for the President to use the Congress as a prop for another urgent speech meant to jump start his flagging campaign for re-election.

Sadly for NBC, that date coincides with opening night of the national football league, an event that will garner far higher ratings than the Presidential address, should the President choose to compete with Aaron Rodgers.

Of course, the President's speech will likely get lower ratings than whatever is running on the Bravo channel (especially if it is a new edition of "The Real Housewives of New Jersey.)

This whole kerfluffle masks a deeper problem for this President. Nothing he says whenever he gives his speech is going to change his election prospects. Only a dramatic turn in the economy will help Mr. Obama get re-elected (unless of course the Republicans nominate a candidate who campaigns against Social Security and evolution).

The American people are tired of more speeches. They want results. And football.