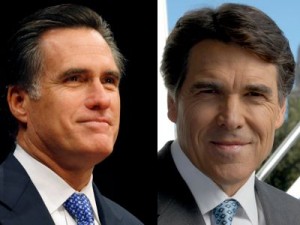 It is wrong to say that the Republican establishment wants Mitt Romney to be their Presidential candidate. First, that assumes that there is a Republican establishment that can make a decision, which I think is a vast overstatement. Second, if there were such an establishment, it is a non-evangelical elite that is simply not that comfortable with Romney’s Mormonism, and has been casting a wide-net for anybody other than Romney and Bachmann. Some had put their hopes in Pawlenty, others begged Haley Barbour, Mitch Daniels, Chris Christie and Jeb Bush to enter the race, to no avail, and now they are turning their attention to Paul Ryan, which will probably yield the same results.

At this moment, it now looks that the choice comes between Perry and Romney. Michele Bachmann, whether she knew it or not, was always a placeholder for Perry, and my guess is that she will quickly fade in the polls.

Republicans are going to consider several questions as they decide who they will support in the uber-primary. Who is the better politician? Who can lead the country better? Who can beat Obama? Who will run a sharper campaign? Who has better, more useful experience? Who has the plan to jump start the economy? Who has a better track record on jobs? Who understands the common man better?

Other questions will follow: Who better shares my values? Who is smarter? Who shares my positions on major issues? Who do I admire? Who will unify the country in ways to help it move forward to confront the big issues of the day?

On some of these questions, Perry is the better answer. He is a better natural politician. He understands the Republican base. He will run a tougher, sharper campaign. Perry doesn’t come from great wealth, so he understands the concerns of average Americans better.

But out of most of them, Romney comes out on top. Romney is smarter intellectually. He has proven that he can win in deep Blue states. He has proven he can work with Democrats and get big things done. He won’t play base politics at every moment. He will seek common-ground on things. While Perry is claiming success with the Texas model on jobs (and deservedly so), I think Romney is better able to understand the complexities of international trade, international finance, and how best to create jobs in America today.

Both Perry and Romney share many of the same positions. They are both pro-life (although Romney is a late convert). Both don’t want taxes to go up. Both want to cut federal spending.

I have some concerns with both when it comes to religion. To be candid, I am not that comfortable with Mormonism. But neither am I that comfortable with Perry’s evangelical Southern Baptism. The difference, I think, is that Romney won’t try to change the laws to fit his religious outlook. Perry, as evidenced by his Prayathon, seems more than willing to mix religion and politics, at every available moment. I would prefer a candidate to keep religion out of politics.

Perry is obviously not the candidate of the Bush team. Karl Rove has little regard for his boss’s successor, and other Bushies have chimed in. In many ways, that makes Perry more attractive as an outsider, this being an outsider election year.

At the end of the day, I want the best, most conservative candidate who can beat Obama. I think the safest bet, right now, is Mitt Romney, but he has got to step up his game a bit, and not just wait for the rest of the field to go away. Perry is a riskier choice, mostly because his naked play to the base can and will alienate independent voters.