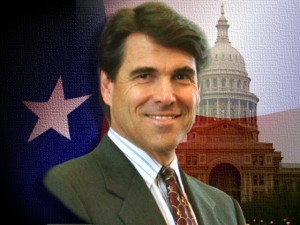 "I mean, printing more money to play politics at this particular time in American history, is almost treacherous, or treasonous, in my opinion".

That was Rick Perry’s comment about Ben Bernanke and the Federal Reserve.

Karl Rove said that the comments “went too far.” Others called them unpresidential. The current President, Mr. Obama, said it was a sign that Mr. Perry wasn’t quite ready for prime time.

From an historic standpoint, the Texas Governor’s statement was more than a little bit interesting. Perry has positioned himself as a conservative populist. A hero to social conservatives (witness the National prayer service thing he hosted). He also fancies himself to be a populist, fighting against Washington and New York banking interests.

Historically speaking, though, his fight against Bernanke’s easy money policy is a fight for New York banking interests. This was most notable in the fight in the late 19th century between interests that wanted a bimetal system that would expand the money supply by basing the currency on both silver and gold, and those who wanted to constrict the money supply by basing it purely on a gold standard.

This was a regional fight between the agricultural interests in the South and Midwest who wanted an easier money supply and the banking interests who wanted to stick to the gold standard.

This fight was best exemplified in the famous Cross of Gold speech made by William Jennings Bryan.

Wikipedia put it this way:

“The Cross of Gold speech was delivered by William Jennings Bryan at the 1896 Democratic National Convention in Chicago on July 8, 1896. The speech advocated bimetallism. Following the Coinage Act (1873), the United States abandoned its policy of bimetallism and began to operate a de facto gold standard. In 1896, the Democratic Party wanted to standardize the value of the dollar to silver and opposed a monometallic gold standard. The inflation that would result from the silver standard would make it easier for farmers and other debtors to pay off their debts by increasing their revenue dollars. It would also reverse the deflation which the U.S. experienced from 1873 to 1896.”

“Backers of a monometallic gold standard felt that protection against inflation was of paramount importance, and they believed that a monometallic gold standard was the best way to achieve this end. Inflation is disadvantageous for creditors, and degrades the value of savings. Saving represents deferred spending and a source of capital for lending.”

“William Jennings Bryan secured the Democratic Party nomination at the convention, but was beaten in the presidential election by William McKinley. This situation was repeated in the year 1900 and the United States adopted the monometallic gold standard de jure in that year. By the first decade of the twentieth century, among major nations, only China and Hong Kong remained on the silver standard.”

"Having behind us the producing masses of this nation and the world, supported by the commercial interests, the laboring interests and the toilers everywhere, we will answer their demand for a gold standard by saying to them: You shall not press down upon the brow of labor this crown of thorns, you shall not crucify mankind upon a cross of gold.”

The banking interests won the battle more than a century ago, and now they inexplicably have Rick Perry in their corner this time around. You would think that easy credit and prying more capital out of the hands of New York bankers would be effective messages in Iowa, Texas, South Carolina and in other areas that have heavy agricultural interests.

But inflation is seen as worse than deflation by many voters, despite the fact that inflation helps those who have heavy debt burdens. A weaker dollar is easier to pay off than a stronger dollar.

This also speaks to overall confusion about what is going on in the American economy today. Bernanke is not the devil that Perry makes him out to be. He is an academic, yes, and an economist, and perhaps not a politician that plays well on television. But he knows a great deal about the economy. And he has done yeoman’s work in keeping this financial crisis from spinning into a deep, dark depression.

Perry’s comments are counter intuitive. Perhaps they are unpresidential, but they speak to the fact that most conservative voters hate and fear inflation more than deflation, even if inflation works better for their own interests.