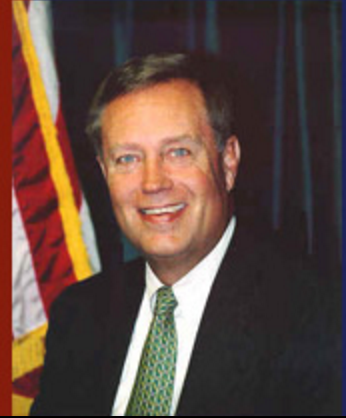 To clarify: Ian Baker Finch was the former British Open winner who would later lose his ability to hit a tee shot and would become a famous broadcaster.

Mike Oxley became famous in the financial world for Sarbanes-Oxley, legislation passed after Enron, MCI and a variety of other big companies went belly-up after conducting financial shenanigans.

Oxley, who died on January 1st, was a tough competitor but a very gracious golf companion.

I wanted to play well with Ox, as he was known to his friends, because he was a good golfer and an important Member of Congress. I was the Press Secretary to the Speaker of the House and I wanted to make a good impression.

And before I hit the sixth hole of whatever course we were playing at the time, I was a pretty decent golfer myself.

But as it happens, I hit my drive out of bounds on 6 and then hit my next one out too, and my round went down hill after that.

To Mike Oxley, my lousy golf play didn’t make much of an impact. He played his own game and tried to cheer me up as I struggled with mine.

That was Mike Oxley. He was a gentleman, with a warm smile, an easy laugh and a nice demeanor that shielded a fierce determination to do right by his constituents.

Over the years, I would play more than a few basketball games with Ox too, and he was the same on the basketball court. He had a great jump shot. He made everything. He played old man basketball with skill and with the same competitive spirit that drove him in golf and in politics.

It is weird to think that Ox would die at age 71 from lung cancer. He had been such an active athlete and a non-smoker to boot.

Ox came to Congress in a special election in 1981. Ronald Reagan had already been President, as Jim Counzelman, his long-time Chief of Staff, related at the funeral yesterday, and Oxley had the opportunity to get a private lunch with him.   They, of course, hit it off. Ox was that kind of guy.

He would toil the next decade and a half (roughly) in the minority; if that didn’t teach you humility, nothing else would before Republicans swept into the majority in 1994.

He would rise up the ranks of the House Commerce Committee, taking up complicated issues and solving difficult problems. When it became his turn to chair the committee, my former boss Denny Hastert had a little problem. Billy Tauzin, who had switched parties back when the GOP had swept into power had also been promised the Chairman’s gavel for his trouble.

Hastert, like King Solomon, split his baby – the once all-powerful Energy and Commerce Committee – into two parts, shifting the entire financial services portfolio to the Banking Committee, thereby given Oxley an “A” Committee to chair of his very own.

I don’t think Mike was particularly happy with the decision, but he made the most of it and it was from that perch where he passed his iconic Sarbanes-Oxley bill.

Ox died on New Years Day. Had he died on New Year’s Eve, it would have been the capstone to a pretty crappy year for me personally. My dad died the day after Thanksgiving, my mentor Bill Gavin died earlier in the year, my former boss Hastert had legal troubles which were personally challenging, my friend John Boehner quit the Speakership, and Ted Cruz and Donald Trump threatened to take my political party off the ledge. Besides that, the play was very enjoyable, Mrs. Lincoln.

I don’t think Mike got a chance to watch the Notre Dame-Ohio State game before he died, but if he had, it would have brought a smile to his face. And that would have been the happiest result of that sad game.

Mike Oxley was replaced in Congress by the firebrand Jim Jordan which is probably the worst trade in history, rivaled only by the Red Sox trading away Babe Ruth.

Oxley perfected the art of disagreeing without being disagreeable. Jordan is disagreeable even when he doesn’t disagree with his own leadership on the end result.

Oxley was a conservative in the traditional sense. He joined the FBI in 1969, which should give you a sense of his sensibilities. He saw the need for limited government but also saw the need for law and order.   But he also believed that under our Constitution, you don’t always get everything that you want. He was conservative by temperament, not by ideology.

I hope that he doesn’t represent a past era of common sense legislators. Instead, I hope his example serves to inspire those who serve in Congress today, members like Pat Tiberi and Paul Ryan, who were at the funeral and who continue to do their best for their constituents and for the American people.

Mike’s son, Elvis, gave the other eulogy yesterday. As is true with many sons of Members of Congress, Elvis had what was certainly a complicated relationship with his dad. He didn’t use the term, but Elvis (who was named Chad by his parents when he was born, but who changed his name to better reflect his rock star sensibilities) acknowledged that he had a few mulligans in his life. He told us yesterday that his Dad told him that he usually got things right the second time.

It was a funny moment, and so true about life.

If only we all had a second chance to live it, we would all do it so much better. Unless, of course, you were Mike Oxley. He did it right the first time.

He will be missed.