His Words Jumped Off the Pages 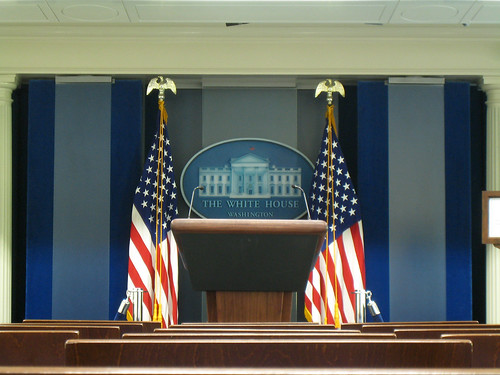 'View from the press seats' by JoshBerglund1 Licensed under CC BY 2.0 via flikr

His words jumped off the pages.

And at that point, I knew I was in the Major Leagues.

I moved to Washington in September of 1989, and improbably found myself with a job in the office of House Minority Leader Bob Michel.

My dad’s colleague, John Coyne, a former speechwriter to Spiro Agnew, had set up a meeting for me with Bill Gavin, who was writing speeches for the Leader.

I told Gavin that I was a conservative Irish Catholic and that I wanted to work in Washington.

He found a place for me as a paid intern.

It was there that I got a chance to watch a real craftsman at work.

An effective speechwriter is both audacious and cautious at the same time.  He takes chances with language but all within the parameters of realistic policy.  Don’t make promises you can’t keep, but don’t make realistic promises pedantic or mundane.  Make them sing.

It was Bill Gavin who taught me all of that.

Gav, as he was known around the office, had started his career as an English teacher, but got his start in politics working for Richard Nixon during the 1968 campaign.   Nixon knew how to hire some pretty special speechwriters, including Bill Safire, Ray Price, Pat Buchanan and Bill Gavin.   He worked for a while in the White House after Nixon won,  and then departed for a short-lived tenure at the Department of Health, Education and Welfare and from there to the United States Information Agency, better known as USIA.

This was in the heart of the Cold War, and USIA was the main propaganda arm of the American Government.  Instead of blasting the Iron Curtain with dull political diatribes (which they got plenty of from the Soviet Union), under the direction of Willis Conover, USIA beguiled the East with American Jazz, a subversive subliminal attack on the communist orthodoxy preached from Moscow.

It’s hard to precisely sum up how much Gavin’s speeches were influenced by Conover’s love of jazz, but we can say that Gavin is and was a huge Jazz aficionado .

He left USIA to work for conservative icon James Buckley, who won a Senate seat in New York, of all places.  After Buckley was defeated in his reelection bid, Gav then went to work for Michel, whose office included old pros Ralph Vinovich (who had been a key staffer to Everett Dirksen), parliamentary expert Bill Pitts, and seasoned press secretary Mike Johnson, and future Department of Transportation Secretary Ray LaHood.

The Michel office was chock full of consummate professionals, men and women who knew both the art and mechanics of politics.  They all worked for a certified war-hero, a forceful leader, the epitome of Midwestern common-sense conservatism.

Bob Michel may have been largely anonymous around the country, but he was revered in his district and inside the beltway.  When people asked, “will it play in Peoria,” they could just as easily asked, “Will it play with Bob Michel?”

It was Bob Michel who got Ronald Reagan’s bold new legislative agenda through the House of Representatives, which was still controlled by Democrats, and it was Bob Michel who narrowly escaped the political ramifications of that agenda, which wasn’t viewed as a smashing success by the voters in its early days.

If Pitts was the floor magician and Johnson the press maven and Vinovich the Chief of Staff, it was Gavin who was the intellectual heart and soul of the Michel operation.   He was the wisest of wise men, the philosopher-in-chief, the “movement” conservative.

I served only in the last five of the 38 years Michel era, so I was but a blip in the history of the office.

But what I learned from that office and from Bill Gavin would shape the rest of my career.  I would always be a Michel guy.

It was Bill who gushed with pride when a line that I wrote for Michel on a long-forgotten legislative battle -- something about the Democrats being afraid of a dangerous dose of Democratic debate (they had once again closed down the amendment process, not allowing Republicans to offer their alternatives) – that had been quoted in the New York Times.   He told me that I made my bones.  I was thrilled.

It was Bill who gave me a lengthy memo on all of the books that I needed to read to round out my education and better inform my philosophy.  Included were Biblical passages, books of fiction and non-fiction.  It would take me years to work through the list.

It was Bill who talked it through me when we were going to war against Iraq the first time (I was pretty skeptical).

After Bob retired in 1994, Gav went to work on the Great American Novel.  He had already penned an influential book, Street Corner Conservative that described his journey from a solidly Democratic upbringing in Jersey City to an intellectual evolution to a conservative movement based on faith, family, and an appreciation of timeless American values, most of which were under assault by the loopy left.

One Hell of a Candidate was the result, a hilarious and all-too-accurate spoof of the modern world of politics.

After going through the painful process of producing that book (and let’s not kid ourselves, when you embark on writing a novel, you shed some serious blood), Gavin wrote an invaluable non-fiction tract on the craft of speechwriting, which he called, Speechwright.  It was so good, that when I taught a class on political communications at Johns Hopkins, I strongly recommended my students buy the book.

My friend and mentor Bill Gavin has been feeling a bit under the weather lately, and so I thought I would write something to cheer him up a bit.  He’s been an inspiration to me and my hope is that this little piece would inspire him to continue to inspire others.  Or at least get more people to buy some of his books.

So, here’s to you Bill Gavin.  And thank you.