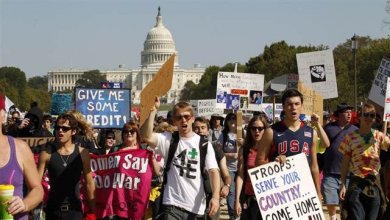 Wasting away again in Obamaville.

Looking for my lost shaker of salt.
Some people claim that George Bush is still to blame.
But I know.
It’s Barack Obama’s fault.

In the wake of the stock market crash of 1929, and in the depths of the Great Depression, shantytowns sprung up around America.

Called Hoovervilles, these itinerant communities came to symbolize the failure of the Herbert Hoover Administration to deal with the economic calamities of that bygone era.

We are now entering into Day 100 of the so-called Occupy Wall Street protest in New York City, and the movement has spread to other cities.

Doug Schoen, the Democratic pollster, did a survey of these protestors and he found that they didn’t represent Main Street at all. He wrote this morning in the Wall Street Journal that what he found instead is that the movement “comprises an unrepresentative segment of the electorate that believes in the radical redistribution of wealth, civil disobedience and in some case violence.  Half have participated in a political movement before, virtually all say they would support civil disobedience to achieve their goals, and nearly one-third would support violence to advance their agenda. The vast majority of demonstrators are actually employed. What binds a large majority of the protestors together is a deep commitment to left-wing policies, opposition to free-market capitalism and support for radical redistribution of wealth, intense regulation of the private sector and protectionist policies to keep American jobs from going overseas.”

This is the group that President Obama and his Democratic colleagues are now embracing, but that shouldn’t in any way be a surprise.

I walked by the Washington version of Occupy Wall Street yesterday, and what I found was a bunch of very nice camping gear arrayed in a city park. These were no shanties. It seemed to me to be fairly nice version of a Boy Scout camp ground, (without the nice boy scouts, of course), plopped right in the middle downtown Washington.

I didn’t think immediately of crushing poverty and desperate homelessness. What I thought first is that these people have some bucks and that I wished I could afford a nice tent like that.

I also thought that the actual homeless people who do stay there on occasion must be pretty annoyed that these middle class yuppies are taking their space. I don’t know if these jokers have a permit or not, but I sure hope they do. D.C. could use the money.

It wouldn’t surprise me if these protestors biggest concern (outside the politics) centered around where they could find some good arugula, because they look to me to be a bunch of arugula eaters, looking to find their inner-flower child.

That this is a far left-wing movement comes as no surprise. That most of them still have jobs is a bit of a surprise. They probably all work for the government or at least for a government-union.

These folks aren’t quite wasting away in Obamaville, but they are certainly wasting my time and yours. They ought to get back to work.