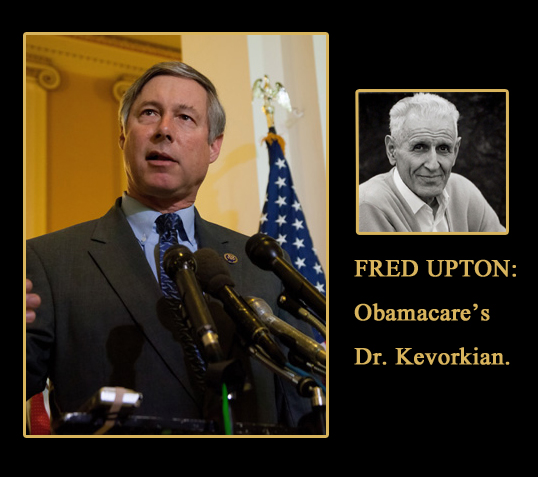 If the Supreme Court decides to throw out President Obama’s number one legislative accomplishment later this month on the grounds that it is unconstitutional, much attention will be spent on the characters that make up the highest court in the land.

One fairly obscure but increasingly powerful presence will be largely overlooked, and given his humble nature, that is not surprising.  But Fred Upton’s role in building the case against Obamacare should not be discounted.

Upton, who is facing a primary challenge from the right in August, has been condemned by conservatives for being too much of a moderate squish.  But since becoming Chairman of the powerful House Energy and Commerce Committee, Upton has shown that he can be a pretty tough conservative.

And when it comes to Obamacare, Upton has proven to be the controversial law’s Dr. Kevorkian.  Under Fred’s leadership, the Committee has put the health care law under the spotlight in 22 hearings.  The committee has issued 8 in-depth reports about the failures in the law, and it set up a separate communications operation, called “The Exam Room”, which has issued 39 other reports.

Fred has sent the Obama administration 17 letters and he has written 9 op-eds, all building a case as to why the law is both bad for the American people and bad constitutionally.

The Upton assault has yielded extensive media coverage in thousands of media outlets, and has helped to light a media firestorm that just might lead to the law’s demise.

The Committee is now thinking about next steps when and if the law is overturned.  Fred Upton is no dummy and he knows that two things doomed the law in the eyes of the American.  First, the process to pass the law was inherently corrupt, and a bad process leads to a bad law.  He most likely will try to find ways to build a bipartisan consensus to fix the things that are broken in our current system without taking actions that will kill what is working.

Second, Upton will take a step back and try to listen to what the American people actually want, something that the Obama Administration decided (at its own peril) not to do.  Upton won’t just listen to the loudest voices either.  He will carefully listen to everybody to try to build a better consensus in the country for the right path forward.

The simple fact is that the American people don’t want a big government solution that puts all of their health care decisions in the hands of a very few elite bureaucrats.  That is why they didn’t like Obamacare.

Fred Upton, the Dr. Kevorkian of Obamacare, understands why his constituents want to go in a different direction when the Republicans start replacing the law after it is repealed.