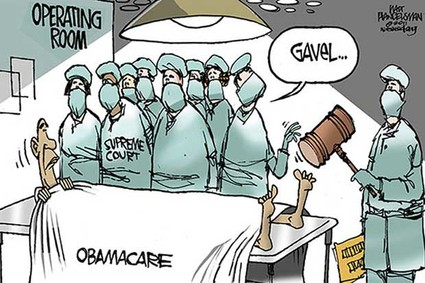 So, Ruth let the cat out of the bag.

Supreme Court Justice Ruth Bader-Ginsburg hinted over the weekend that Obamacare is a goner.

She didn’t exactly say that, but Politico reported that at an American Constitution Society forum, she did say, “It is likely that the sharp disagreement rate will go up next week and the week after.”

In other words, strap on your helmet.  The political game of football is going to get rough.

If Obamacare is thrown out by the Supremes, it will most likely be a close 5-4 decision and that will only increase the stakes for the next election.

Many Republicans are ambivalent about the court striking down the law.   In many ways, Obamacare has been a useful campaign tool.  No law has done more to revive the once moribund party and united all of its factions.

On the other hand, no law has done more to stunt job creation and keep the unemployment rate high, especially among those who are trying to get their foot in the door for their first job.

Republicans will be tempted to re-pass the most popular mandates and enact them into law.  But they have to careful on how they do it.  While many health insurance companies are already willing to keep kids on their parent's insurance until they are 26 and have announced a willingness to do away with pre-existing conditions – two items that are very politically popular – these changes in law do not come without a cost.  And that cost usually leads to higher premiums.

The issue with health care before Obamacare is still the issue today:  Cost.  How do you slow down the explosive increase in the cost of health care, from premiums to the universal cost to our economy?

Obamacare tried to use the government as a way to hammer down costs, a la price and wage controls.  But using the marketplace is a much better way to deal with price increases, and the President’s health care plan had only a sprinkling of market reforms.

The Republicans should immediately introduce its market reforms and start a debate about how to improve the system with better ideas that won’t kill jobs.  It should also immediately celebrate the demise of Obamacare with a rally of a selection of small business owners who will once again be able to hire workers and expand their business, now that the hated health care law has been struck down.

It has been suggested that the Republicans should simply change the conversation from health care to jobs, and keep the conservation on the economy.  Easier said that done.

If Obamacare is struck down, its demise will be one of the themes of this campaign.  Republicans should stay on offense on the issue.

As one friend of mine noted in a meeting, it says a lot about the choice this fall that if the Constitutional law professor’s number one legislative achievement is declared unconstitutional by the Supreme Court.

The President should have known better.  Obamacare is a failure just like the Obama administration