4 and 7: Niggling Detail About Attack on Romney’s Jobs 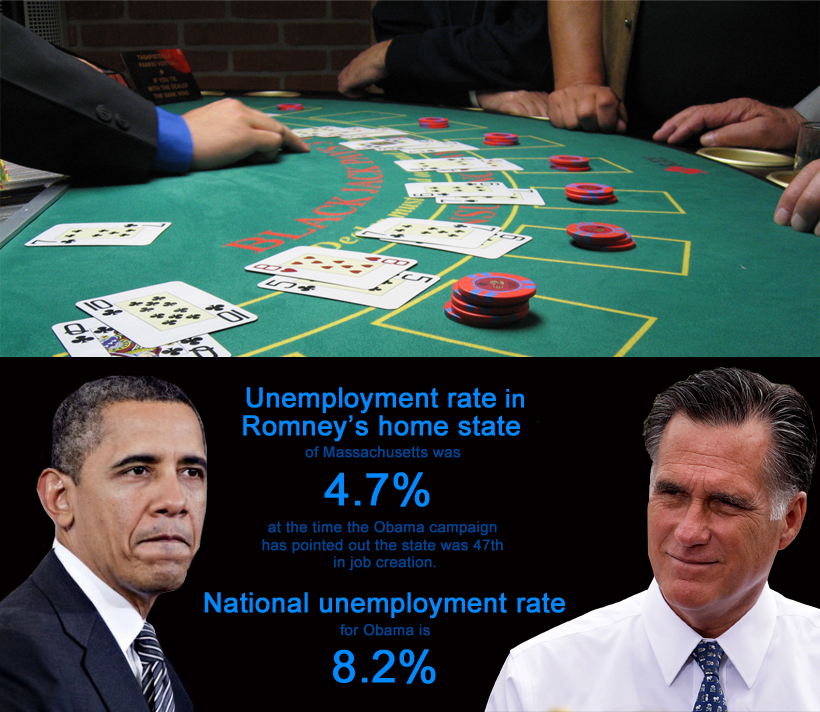 In blackjack, when you get a 4 card followed by a 7 card, you almost always double your bet.   The theory is that you will most likely draw a face card or a ten, and thus you will end up with a 21.

The only thing that can beat you is if the dealer draws a blackjack.

In political blackjack, the Obama campaign is doubling down on a 4 and 7 strategy.  They believe that they can drive home the message that Mitt Romney was a failure as a job creator when he served as governor, because his home state of Massachusetts was 47th in job creation at one point during his term.

Sounds convincing, except for one little, niggling detail.

The unemployment rate in the Bay State at the time was 4.7 percent.

Well, because the national unemployment rate for President Obama is 8.2 percent.

An unemployment rate is kind of like golf.  A lower score is better.

Imagine if this country had 4.7 percent unemployment.

Our budget would be much closer to being balanced because we would have higher tax revenues (people pay taxes when they go to work) and lower expenditures (the state has to shell out a lot less in welfare when more people are working).

Our economy would be much stronger with a 4.7 percent unemployment rate.  Housing prices would bounce back.  The stock market would roar.  People’s retirement portfolios would return to strength.   The American people would feel more confidence, folks would be happier, the approval rate for Congress would improve, and the world would once again look to the good old US of A for leadership.

They have misspent the taxpayers’ money in boondoggles like Solyndra.  They have passed job-killing laws like Obamacare and Dodd-Frank.  They have unleashed the EPA to crack down on small and medium sized business.  They have launched lawsuits at the Department of Justice, issued crazy decrees the NRLB, passed job-killing regulations at the FCC and FTC, and pretty much done their level best to kick business to the curb.

And they have the temerity to call Mitt Romney a job-killer.

4 and 7 are important numbers in this campaign, but not how the Obama campaign is using them.