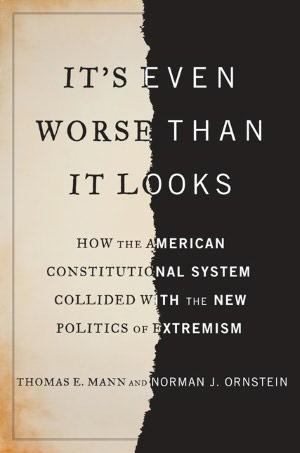 Norm Ornstein and Thomas Mann recently released It's Even Worse Than It Looks, a book dedicated to the principle that bipartisanship is a worthy goal and that its breakdown is all the Republicans’ fault.

First, the nature of our politics is adversarial. We have a two-political-party system, where compromise between the parties is supposed to be a rare accomplishment. Otherwise, why have two parties?

In fact, Democratic leaders are far more beholden to their extremes than are Republican leaders. Think about it. Barack Obama is far more liberal than Mitt Romney is conservative. John Boehner, while not exactly a centrist, is not by any means a conservative ideologue, while Nancy Pelosi was easily the most liberal Speaker in the history of the House.

I would contend that compromise has not moved America forward. The Missouri Compromise, after all, was a failure. We still fought the Civil War to decide the legitimacy of slavery in this country. Compromise served to delay the inevitable.

Our national politics, instead, has been punctuated by the thrust and parry between winners and losers. Franklin Roosevelt didn’t rely on compromise to pass the New Deal. He relied on pure political power.

Sure, Lyndon Johnson relied on Republican votes to pass civil rights legislation, but the bulk of his Great Society program was done through his massive majorities in both the House and the Senate.

Ronald Reagan was able to muscle through his program in the first two years of his presidency because he had the votes of Boll Weevil Democrats, not the support of House Speaker Tip O’Neill. And those Southern Democrats didn’t vote with Reagan because of their desire to compromise; they voted with Reagan because they knew that it was their only chance to stay ahead of the Republican revolution that was soon to sweep the region.

Experts like to point to Reagan’s Social Security compromise as an example of significant bipartisan cooperation. But guess what? Social Security is still one of the top reasons this country is going broke, and the grand compromise only delayed its eventual bankruptcy.

George Bush understood that to get his tax-cut program through, he had to use the raw power of reconciliation. His compromise was not with Tom Daschle. It was with Olympia Snowe.

And Obama understood that compromise in his first two years was a waste of time. He had to hurry and pass as much of his program as quickly as possible and hope that it would work out. He did it with no Republican votes. And it hasn’t worked out as well as he thought it would.

Should the Republicans take control of the House, Senate and the White House in this coming election, they will pass significant tax and entitlement reform. They will do it under a reconciliation process, which will allow them to get it through the Senate with a simple majority. The law they pass will expire in 10 years, plenty of time for the country to decide whether their reforms were worthwhile or not.

Norm Ornstein and Thomas Mann will condemn the Republicans for “jamming” the Democrats, and once again, they will blame the GOP for being too conservative and too unwilling to “compromise” with Nancy Pelosi and Chuck Schumer.

But progress doesn’t happen with false compromise. It happens only with raw political power and the will to get big things accomplished.